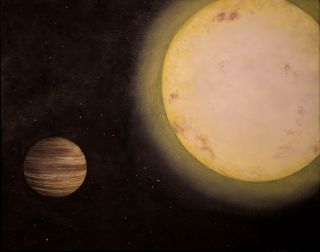 INDIANAPOLIS — Tiny telescopes in Arizona and South Africa have spotted a Saturn-like planet in orbit around a star about 700 light-years from Earth.

Scientists using the Kilodegree Extremely Little Telescope (KELT) and other ground-based tools spied the alien planet as it passed in front of its star, a process called transiting.

The planet, called KELT-6b, can be seen from the surface of Earth for five hours as it transits — a relatively short window in which to catch the planet making its presence known. The research team required patience and luck to make their find, the scientists said.

The planet is also very close to its star; its year lasts only about 7.8 days. Although KELT-6b has no rings, its mass and size resemble the planet Saturn, scientists say.

"To participate in planet discovery here in Kentucky, it’s just incredible to me to be able to do that," Collins said in a statement.

Collins presented information about the newly discovered alien planet here at the 222nd meeting of the American Astronomical Society.

The newly discovered planet is also something of a cousin to another planet famed among exoplanet hunting scientists. HD 209458b, a heavily studied alien planet, is also a gas giant that orbits very close to its star.

"KELT-6b is a 'metal-poor' cousin of HD 209458b," said Keivan Stassun, professor of astronomy at Vanderbilt University and a member of the KELT team. "The role of metals in the stellar environments in which planets form is a major question in our understanding of these other worlds. This new planet is among the least endowed with such metals that we know of, and because it is so bright it should serve as a benchmark for comparative studies of how and under what conditions planets form."

Collins is now investigating a second body in the same system as KELT-6b.