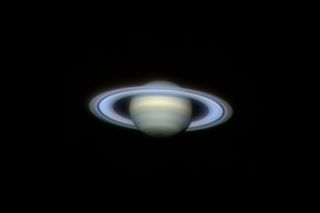 Andrew Kwon took this image of Saturn on April 4, 2013 from his backyard observatory in Mississauga, Ontario, Canada.
(Image: © Andrew Kwon)

One of the largest astronomy meetings of the year will open to the public for the first time in its history.

More than 500 astronomers, journalists and guests will bring their cosmic know-how to Indianapolis, Ind. next week for the 222nd meeting of the American Astronomical Society (AAS). The conference begins on Sunday (June 2) and runs through June 6 at the Indiana Convention Center; it is the second of two meetings held annually by the AAS.

New findings about alien worlds, mysterious dark matter and the Milky Way will be discussed, and this year anyone can take part in the cosmic action. [See Space Photos from the 221st AAS Meeting]

"For the first time ever, the AAS is opening its meeting to amateur astronomers and other interested members of the public, who may take advantage of a special one-day registration rate of $50 per day on Monday, 3 June, or Tuesday, 4 June, or both days (in which case the cost will be $100)," officials from the AAS wrote in a release.

Several presentations on Monday and Tuesday will be geared toward amateurs that decide to pay the fee and attend. The presentations include information about the Hubble Space Telescope, nearby exoplanets, Pluto, and the formation of galaxies in the early universe.

In addition to those talks, the society will also hold two free public events during the convention.

Astronomers will throw a star party on Monday night at 9 p.m. EDT (0100 June 4 GMT) to show off Saturn and the ringed giant's moon Titan through telescopes set up outside of the convention center. Any curious members of the public are welcome to come take a peek for free.

"It's a great opportunity to see the stars with professional astronomers and meet the local astronomers in your hometown," AAS officials wrote.

On Tuesday night, "BBC Sky at Night" presenter Chris Lintott of the Adler Planetarium and Oxford University will speak about citizen science and its role in astronomy today. This talk begins at 8 p.m. EDT (0000 GMT) at the convention center. It is also free and open to the public.

Throughout the course of the conference, scientists will take part in town hall-style meetings about NASA, the National Science Foundation and other agencies. The latest findings from the badly damaged planet hunting Kepler Space Telescope will be presented as well.

Twitter users can follow the conference using the hashtag #AAS222, and SPACE.com will bring you complete coverage of the meeting from Indianapolis. For more information on the events open to the public, visit: http://aas.org/aas-222nd-meeting/one-day-program-amateur-astronomers-public