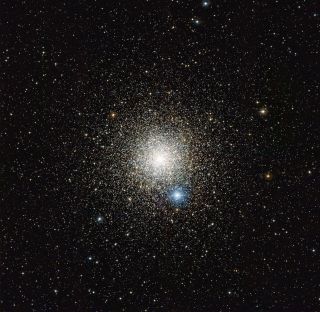 This image from the Wide Field Imager on the MPG/ESO 2.2-metre telescope at the La Silla Observatory in Chile shows the globular star cluster NGC 6752 in the southern constellation of Pavo (The Peacock). Studies of this cluster using ESO’s Very Large Telescope have unexpectedly revealed that many of the stars do not undergo mass-loss at the end of their lives.
(Image: © ESO)

As with humans, it appears stars that ingest too much salt have problems.

Stars with low sodium in their compositions live longer than their saltier counterparts, a new study reveals.

It took nine years to chase down these findings after Simon Campbell, a stellar astrophysicist at Monash University in Melbourne, Australia, stumbled across some journal papers from the 1980s. [How Low-Sodium Stars Die (Video)]

The studies contradicted established theories about globular clusters, which say most stars in the stellar group have similar evolutionary histories.

Campbell led a multinational group that confirmed the sodium observations using the powerful Very Large Telescope in Chile. The team is already lining up more astronomical targets to find out why this is happening.

"The sodium test ... is an ideal tracer because these low-mass stars are not hot enough to affect their own sodium abundances," Campbell told SPACE.com.

"So if there were differences between stars in different stages of evolution, then we could be sure that it was real."

Salt of the universe

Because NGC 6752 is the third-brightest cluster of stars seen from Earth, it's extremely well-studied. Astronomer James Dunlop first cataloged the southern cluster in 1826, but the cluster itself — at magnitude 5.4 — is bright enough to be just barely visible to the naked eye.

Campbell chose to observe that cluster due to its proximity, and also because there is little dust obscuring the sightline from Earth. "It probably wouldn’t have such a big effect on the sodium, but it could affect the [observed] temperatures of the stars," he said.

The researchers took a sample of 100 stars from the cluster, which has an estimated million stars within its boundaries. The observed stars ranged anywhere from white-hot youths to large red giants. There, they confirmed previous observations that 30 percent of the stars in every stage of life have low sodium.

The researchers also found something new, however. During their lifetimes, stars generally follow an evolutionary pathway that is cataloged in the Hertzsprung-Russell diagram.

Late in their lives, however, low-mass stars (0.6 to 10 times the mass of the sun) jump off the track to what is called the "asymptotic giant branch." There, they alternately burn hydrogen and helium in shells and eventually shed gas and dust. The ashes become white dwarfs.

Taking a closer look at the spectra of individual stars, the researchers discovered that all the observed asymptotic giant branch stars, or ASBs, had low sodium in their spectra. The ASBs also had a high proportion of hydrogen and helium, indicating they were part of the first generation of stars spawned in the universe.

Extrapolating from that, the researchers concluded that all the high-sodium second-generation stars in the cluster will not reach the ASB phase. They will go directly to the white dwarf stage.

For astronomers, this could mean needing to rewrite the rules for determining the timescales of a star's lifetime. Standard practice today is to count the stars in a cluster, where the neighbors have similar origins and lifespan.

But this could be the wrong way to go if astronomers include AGBs in the star counts, Campbell and his collaborators concluded.

"We're not exactly sure why this is happening," he added. The group is planning follow-up observations of clusters such as M2 and M5, again using the Very Large Telescope if they can secure the telescope time.

Earth's sun, he added, will likely live a long time because it also has low sodium in its composition.

In 2009, the group looked at carbon and nitrogen in NGC 6752, and confirmed there were differences in these elements between star populations.

"However, carbon and nitrogen can be changed inside the stars themselves," Campbell said. "So it was difficult to say if there were stars failing to reach old age or not, since maybe the stars were just changing their [carbon] and [nitrogen] contents through their evolution."

A paper describing the sodium findings was published today (May 29) in Nature. Participating authors came from Australia, Germany and Denmark.