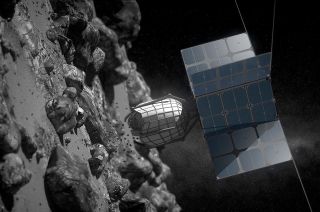 Artist concept of a commercial spacecraft collecting a sample rock off the surface of an asteroid.
(Image: © Deep Space Industries/Bryan Versteeg)

Commercial asteroid miners may find an initial market among meteorite collectors but the long-haul customers for returning space rock samples to Earth are more likely to be scientists, deep-space entrepreneurs say.

The suggestion that public interest can drive advances in science and profits in space was a running theme at this year's Spacefest, an annual meeting for all types of space and astronomy enthusiasts. The event brought together private space companies, government space explorers, academia and the public. Organized for the fifth year by Novaspace Galleries, a space art and astronaut autograph dealer based in Tucson, Spacefest was held May 24 to 27 at the JW Marriott Starr Pass Resort in Arizona.

"The process of getting involved in a financial enterprise, a commercial enterprise, can often further the technology, further the science, and that has happened so widely in meteorites," said Geoffrey Notkin, a meteorite hunter, host of the Science Channel TV series "Meteorite Men," and an advisor to Deep Space Industries, one of the two private companies now looking to mine asteroids for space-based resources and maybe provide sample return services. "It's a beautiful demonstration of how commercial companies and collectors and academia can work together, as happy as can be, because everyone benefits." [Mars Meteorites: Red Planet on Earth (Photos)]

"I hope and expect the same to occur with commercial space exploration," Notkin said during a panel devoted to asteroids.

Notkin explained that the number of meteorites cataloged for science has increased exponentially over the past few decades from fewer than 10,000 in all of history to more than 50,000, in part because of the incentive for collectors to cooperate with the academic community.

"People find meteorites and they could just keep them or try to sell them discreetly, [but] that's not the right way to do it," Notkin said. "The right way is to contact someone in academia and say 'Look, I found a meteorite, can you classify it for me?' A piece [of the rock] is then donated to science permanently and the meteorite then has a name." [Most Famous Meteorites of All Time (Photos)]

"So academia benefits and the finder benefits because the meteorite that he or she found is now worth more money," Notkin said.

The value of asteroid samples may have more appeal to the scientific community than to collectors over the long term, the panelists said, in part due to the relative cost of returning the rocks to the ground.

"If you look at the cost that is being expended per gram for [NASA's asteroid sample return mission] OSIRIS-REx, if you want to use that metric, it's a wildly large amount of money for a relatively small amount of mass," said Chris Lewicki, president of the space mining company Planetary Resources. "I don't know how that necessarily scales that well."

"I would imagine that there would be part interest, whether it is for science or some aspect of collector," he added. "I often joke that there is probably some company, a vodka company, that would like to make vodka exclusively from asteroid water. I don't know how much they could sell it for per liter, but there's probably some who would buy it."

Lewicki cited the moon rocks and dust that were returned to Earth in the late 1960s and early 1970s by the Apollo astronauts as a lesson in supply and demand. Four of the 12 men who collected those lunar samples attended Spacefest to sign autographs and meet with their fans.

"In many ways, those samples are so precious because as time marched on, we knew that we were probably not going to get any more any time soon," Lewicki said. "From a commercial standpoint, from the asteroids, if you go up and get it commercially, you probably know that there will be more soon. Who knows what kind of strange demand that would create in terms of the material."

"One of the things that is kind of important to remember is the business plans and the creative marketing ideas and things like that that we're dealing with, people in our field have been playing with since Apollo, whether it's the moon or asteroids," said Rick Tumlinson, DSI's chairman. "For example, there was a plan for a commercial lunar mission and they looked at what would be the value of moon dust, and what will happen on the commercial side."

"Whether you're going to have the Rolex asteroid watch, the hands will have a little asteroid material in them, that is mainly an early revenue stream that is going to diminish because the less rare [the material] is, the less value it is going to have," he added.

"There's a slightly different curve in scientific use because there's going to be a lot of demand and it's probably going to be more steady because there are all kinds of research that can be done,' Tumlinson said.

Lewicki said the metrics of supply and demand are why it makes more sense for his company to go to a number of different asteroids than retrieve a single large space rock.

"There is a lot more value in getting 500 different samples then there is a monstrous amount from one sample," he said. "And this is in the area of what we're looking at to make this stuff available; going out over the next decade and increasing the amount of asteroids we've been to by a factor of five."

"It would be of just tremendous scientific value for our understanding the diversity of these 50,000 [meteorites] we have gotten in laboratories to what they mean to the hundreds of thousands of objects that we have discovered so far in the solar system," Lewicki said.

"Making an analogy with the collector market, the whole idea of provenance, part of bringing a sample back from an asteroid is the whole point of context," Durda stated. "Context means everything. If you know the parent body that it specifically came from it's of much more value then just a random sample delivered from a parent body that you don't know."

"I think from that perspective, just bringing a sample back from a known source, beyond even the collector market, just from a scientific market, would be valuable," he said.

Along those same lines, Notkin pointed out that the value of asteroid samples can differ based on whether they pass through Earth's atmosphere or not.

"A lot of the most scientifically interesting material cannot be collected as meteorites as all," he explained. "It is just too frail, just too fragile to survive the journey through the atmosphere."

"[But] one of the reasons that meteorites are interesting to collectors is because they've been altered by their journey through the atmosphere. They have often been melted into fantastic shapes. So if we get source material and bring it back to Earth, it has not gone through that process. It is different," Notkin said.

Continue reading at collectSPACE.com about the Spacefest V convention held May 24 to 27, 2013 in Tucson, Ariz.