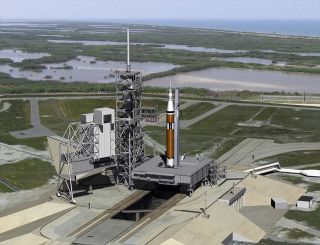 Artist's concept showing a possible layout of a commercial rocket and spacecraft positioned at Launch Pad 39A at NASA's Kennedy Space Center in Florida.
(Image: © NASA)

The historic NASA launch pad from where astronauts blasted off for the moon and space shuttles departed for Earth orbit is now in need of a new rocket to launch.

This week, NASA is expected to begin soliciting proposals for the commercial use of Launch Pad 39A at the space agency's Kennedy Space Center in Florida. Use of the pad by private industry is hoped to maintain the historic launch complex and encourage commercial space activities along Florida's Space Coast.

"We remain committed to right-sizing our portfolio by reducing the number of facilities that are underused, duplicative, or not required to support the Space Launch System and Orion," Kennedy Center Director Bob Cabana said in a statement, referring to NASA's next-generation heavy-lift booster and its crewed spacecraft. [Photos: NASA's Giant Rocket for Deep Space Flights]

"Launch Complex 39A is not required to support our [planned] asteroid retrieval mission or our eventual missions to Mars," Cabana added. "It's in the agency's and our nation's best interest in meeting our commitment and direction to enable commercial space operations and allow the aerospace industry to operate and maintain the pad and related facilities."

Since the end of the space shuttle program in 2011, NASA has turned to commercial space companies to provide launch services. Two companies, SpaceX and Orbital Sciences, were awarded contracts to bring cargo to the International Space Station, while SpaceX, Boeing and Sierra Nevada Corp. are developing crewed spacecraft in a bid to launch NASA astronauts to the orbiting laboratory.

SpaceX has said in the past that it has considered using NASA's launch facilities in place of, or in addition to, its current pad leased from the United States Air Force at Florida's Cape Canaveral Air Force Station. Other companies, such as Alliant Techsystems (ATK), might benefit from the use of the legacy hardware given that its Liberty rocket shares a heritage with the space shuttle's boosters.

Launch Pad 39A was one of two large launch complexes built in the 1960s to support the Apollo program's Saturn V rocket launches to the moon and Saturn IB flights to the Skylab space station. Both pads were later modified for the space shuttle launches to deploy and service satellites and build the International Space Station.

Pad 39A's twin, Pad 39B, was stripped of its iconic launch support towers in 2011 to enable its use for possible future commercial and government launch vehicles. Launch Pad 39A, which supported 92 launches since November 1967 — 12 Saturn V rockets and 80 shuttles — was initially set to support the new Space Launch System.

Budget constraints however, caused NASA to consolidate its future launch pad needs at Pad 39B, leaving Pad 39A without a purpose. And without the funding to modify or maintain it, Cabana said earlier this year that the agency has no choice but to abandon Pad 39A in place unless a commercial user could be identified.

According to the space agency's own assessments, Pad 39A could still serve as a platform for a private company's launch activities. However, this would require the company to take over financial and technical responsibility of the complex's operations and management.

According to a synopsis released by the space agency on Friday (May 17), NASA is contemplating entering into one or more lease agreements for Pad 39A for a minimum of five years. Other terms, including longer-term agreements and different contractual relationships, can be suggested, the agency's synopsis states.

To maximize the use of Launch Pad 39A and keep its gantries and other infrastructure from deteriorating due to a lack of regular maintenance, NASA said it will expedite its process, with submissions due within 30 days of the announcement accepting proposals.