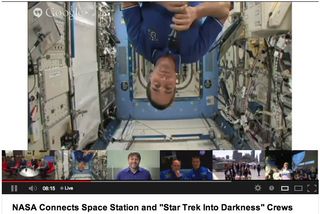 Astronaut Cassidy spun upside-down in the International Space Station at the request of the 'Star Trek' stars during a chat on May 16, 2013.
(Image: © NASA TV)

Hollywood actors who pretend to be space travelers on the USS Enterprise got a lesson on the reality of human spaceflight today from the ultimate expert: a real-life astronaut on the International Space Station.

"I'll just act like this is a perfectly normal thing to be happening," Lindelof said when Cassidy appeared on screen. "We are literally tickled pink to be talking to you right now." [Review: "Star Trek Into Darkness"]

Cassidy also seemed excited to speak to the actors on the ground. Earlier in the week, NASA beamed up a copy of "Star Trek Into Darkness" for the astronaut's entertainment.

"It's great to be with all of you guys," Cassidy said. "I watched the first 30 minutes as I was exercising this morning, and I was riveted as you were racing through the woods and jumping off cliffs. I won't spoil the rest of the movie for anyone that hasn't seen it, but [there are some] pretty cool scenes."

Cassidy went on to explain some of the more unique aspects of life on the International Space Station.

"We have email, of course, but the email only synchronizes about four times a day," Cassidy said. "We do have the ability to go to the Internet, but it's not super fast, it's not super reliable, so it's just really to get news and that sort of thing."

Although the movie's director J.J. Abrams could not participate in the webcast due to a scheduling conflict, he did send in a video question for Michael Fincke and Kjell Lindgren two astronauts that took part in the hangout on the ground. The director wanted to know if Fincke or Lindgren had ever had a personal experience that made either of them believe in extraterrestrial life.

"We all want to know [if we are] the only ones out there, and 'Star Trek' helps us imagine what it could be like if there were other creatures out there, other people other species," Fincke responded. "So I spent a whole year up in space, 381 days, but it was only 240 miles up, so that's not very far in cosmic terms so we think that as we go farther out into the universe, we might find something out there that we don't know about."

While "Star Trek" may be an inspiring piece of entertainment for scientists and astronauts around the world, it is still doesn't necessarily mimic the realities of life in orbit.

"The thing that does grab my attention is that everybody is always walking around and walking onto the bridge of the ship or things like that," Cassidy said. "It's probably hard to make that [realistic] in a movie where technically, how would you make everybody float? So I understand, but it would be far more fun if you could."