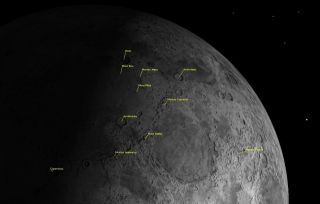 The northern half of the moon exhibits many mountain ranges and a few isolated peaks
(Image: © Starry Night Software)

It's time to spot some mountains on the moon.

When you look at the moon through binoculars or a small telescope, the first thing you notice is that the lunar surface is divided into two distinct forms of terrain: large dark flat plains and bright mountainous highlands. Both of these are pockmarked by an enormous number of craters of all sizes.

Early observers of the moon assumed that the large flat plains were seas, not knowing that liquid water was not available on the dry, airless surface of the moon, and so named them "maria," the Latin for "seas," singular "mare." [See 45 Apollo Moon Missions in Photos]

"Mare" is pronounced "mah-ray," not like a female horse. They named the lunar highlands for the mountains of Earth, not knowing that the mountains of the moon were formed by a totally different process.

The moon has neither tectonic plates nor volcanic action. Virtually all of its mountains are the result of impacts by asteroids in the distant past. Early in the moon’s history, there were many gigantic asteroids in the solar system.

When these impacted the moon and planets, they formed craters far larger than the ones we see today, forming the lunar maria and leaving their rims to form lunar mountain ranges. The enormous heat generated by these impacts melted the surface material of the moon and caused it to flow, swamping some craters and mountains, which stand out now as ruins on the surface of the maria.

The chart shows some of the mountain features visible this week at the current phase of the moon, around first quarter. Several prominent craters are marked to help you get your bearings: Aristoteles, Plato, Archimedes and Copernicus.

Two major mountain ranges divide two other features of the lunar landscape.The Mare Serenitatis ("Sea of Serenity") is separated from the Mare Imbrium ("Sea of Showers") by the Montes Caucasus to the north and the Montes Apenninus to the south. Where these two meet is the prominent mountain Mons Hadley, named for British optician and instrument maker John Hadley (1682–1743). Apollo 15 landed here in July 1971. The lunar Alps, the Montes Alpes, sweep off to the northwest, enclosing the perfect oval crater, Plato.

On the barren floor of the Mare Imbrium are two of the most impressive single mountain peaks on the surface of the moon, Mons Piton and Mons Pico.

Although these mountains look impressive under the low light of a rising sun, they really are quite gentle when compared to the mountains of Earth. If you look again in a day or two, they will be practically invisible except for their whiter color.