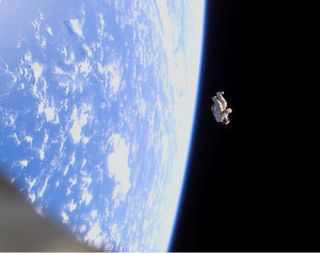 A solitary, unmanned spacesuit floats away from the International Space Station (ISS) during a Feb. 3, 2006 spacewalk. It is destined to burn up in the Earth’s atmosphere.
(Image: © NASA/JSC.)

"Thelast transmission from the RadioSkaf artificial satellite was received onFebruary 18. The spacesuit,outfitted with a radio transmitter, broadcast nearly 3,500 messages to theEarth over two weeks," Samburov said.

On February3, Russian cosmonaut Valery Tokarev and U.S. astronaut Bill McArthur jettisonedan old RussianOrlan M spacesuit, empty except for electronic equipment that attracted theattention of students and other people around the world.

The radiotransmitter broadcast recorded radio messages. The transmission was on 145.900MHz FM, in the VHF or two-meter part of the amateur radio band. Voicetransmissions included suit data, mission time, suit temperature and batteryvoltage.

SuitSat-1was sponsored by Amateur Radio on the International Space Station, aninternational working group made up of volunteers from national amateur radiosocieties.