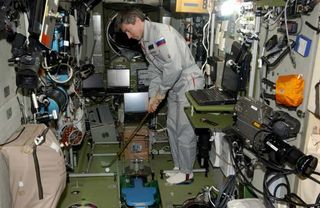 Clad in a cumbersomespacesuit and anchored to a specially designed tee box, PavelVinogradov will hit a six-iron drive along side the station's Russiansegment, taking great care not to hook the ball into the outpost.

"If they were notconfident that there would not be any safety issues with the structuralcomponents of the International Space Station, they would never have gone aheadand approved the full mission," she said.

NASA managers are aware ofthe plans and are reviewing the safety issues.

The ball is expected toremain in orbit for three to four years.

Space debris is one of themost dangerous threats to the station.

Even a tiny fragment ofaluminum would strike with the same force as a rifle bullet. A hit from debristhe size of a golf ball flying at six miles per second could be catastrophic.

Previous NASA risk analysesshow there is a one in 200 chance in any given year of losing the $100 billionstation to a debris hit that penetrates the hull of the outpost.

Based in Toronto, Element21 manufactures golf clubs made of Scandium, a metal alloy used to buildRussian MiG and Sukhoi fighter jets and Russian segments of the station. Thealloy is lighter and stronger than titanium, graphite or steel.

A "launchplatform" was developed along with a spring-like space tee that would holda golf ball in weightlessness yet release it when struck, Hearn said.

Engineers also had todetermine the best place to mount the platform, and the best direction to drivethe ball, to avoid hitting the station, Hearn said.

A gold-plated Element 21six-iron and several golf balls were hauled to the station last September on aRussian space freighter. The golf shot tentatively is slated to take placeduring a spacewalk in late July.

The ball is expected totravel up to 2.1 billion miles before it drops back into the atmosphere andburns up.

"In essence, it'sgoing to be the longest drive ever hit," company spokesman Joe Wieczoreksaid.

Element 21 is linking thedrive to moonwalker Alan Shepard's golf outing during the Apollo14 mission 35 years ago this month.

Hearn declined to disclosethe value of the company's contract with the Russian space agency. The ball isequipped with transmitters that will enable golfers to follow its flight aroundthe world at the company's Web site, www.e21golf.com. Video from the shot also will be used in atelevision commercial.