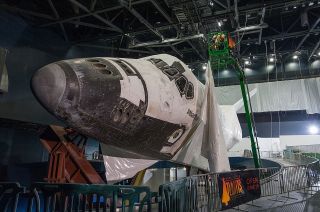 Construction workers at the Kennedy Space Center Visitor Complex in Florida carefully remove a section of plastic shrink wrap from the space shuttle Atlantis inside the $100 million exhibit dedicated to the retired NASA orbiter, April 25, 2013.
(Image: © LaunchPhotography.com/Ben Cooper via collectSPACE.com)

CAPE CANAVERAL, Fla. — How do you un-shrink-wrap a space shuttle?

"This is the very first step in unveiling Atlantis," said Tim Macy, director of project development and construction for Delaware North Parks and Resorts, which runs the Kennedy Space Center Visitor Complex for NASA. "She has been in a plastic 16-millimeter-thick cocoon."

Unlike a caterpillar's cocoon, the shuttle's wrap was intended to shield it from the metamorphosis occurring outside, rather than in. Atlantis rolled into its new $100 million exhibition facility while the five-story building was still under construction.

"It was for her own protection," Macy explained. "With all the construction dust and overspray and everything else that is happening here, it kept her protected in a nice shrink-wrapped sealed environment."

Construction workers used knives to score the plastic cover, being careful not to knick the spacecraft in the process, before carefully cutting away and lifting the wrap off the vehicle. Even before they made the first slice, the workers vacuumed segments of the plastic to avoid any dust falling onto Atlantis. [Gallery: Revealing Atlantis: Space Shuttle Un-Shrink Wrapped]

"This is a priceless artifact," Macy told collectSPACE.com. "She has had a pretty rough life, she's had 33 missions in space and has gone over 12 million miles. It is incumbent upon us to take care of it."

"I would hate to think that maybe if we drop some plastic on it, it might scrape it or catch on it or do something. That wasn't going to be the case," he said.

Macy said unwrapping Atlantis was easier than wrapping it, but emphasized that all of this was unprecedented.

"We're going to take it real slow," Macy said. "What we find in construction is that the slower you go, the faster you go, because you are not making mistakes."

After a brief delay to finish painting one of the exhibit's walls, work got underway to unwrap Atlantis at 9 a.m. EDT (1300 GMT) Thursday. About six hours later, the shuttle's nose and crew compartment, its vertical stabilizer (tail) and aft engines, as well as one wing were uncovered — though the left wing's reveal was partially the work of gravity as the wrap slipped towards the floor.

In addition to displaying Atlantis 30 feet (9 meters) off the ground, the exhibit also presents the shuttle tilted 43.21 degrees to one side, an angle that previously only astronauts could see when the orbiter was in space. Set to open to the public on June 29, the "Space Shuttle Atlantis" attractionis designed to provide visitors the chance to see the orbiter up-close and like never before.

Almost as soon as Atlantis is fully unwrapped, work will begin to open the space shuttle's 60-foot-long (18 meter) payload bay doors, which Macy said is the final big hurdle before the exhibit's public debut.

"Those payload bay doors aren't meant to be opened in one-g [gravity]," Macy said. "Normally they open up in space, no big deal. Here, you really have to pay attention to them. It is a long door — they're not very heavy and flimsy isn't really the right word, but they are very delicate."