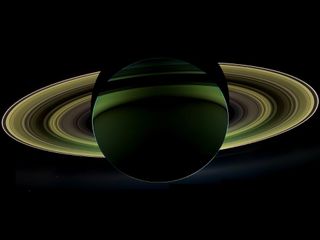 NASA's Cassini spacecraft captured this image of Saturn on Oct. 17, 2012, while in the planet's shadow. Cassini's cameras were turned toward Saturn and the sun so that the planet and rings are backlit.
(Image: © NASA/JPL-Caltech/Space Science Institute)

If you've ever wanted to see how Saturn and its iconic rings look through two of the world's most powerful telescopes, here's your chance.

A team of astronomers studying Saturn's dazzling northern lights displays with the two massive telescopes at Hawaii's Keck Observatory will air live footage from the instruments during a webcast Sunday (April 21) from 9:00 a.m. to 11:00 a.m. EDT (1300 to 1500 GMT).

Members of the research team will discuss their latest and most exciting results during the two-hour show. You can watch the Saturn aurora webcast live on SPACE.com, courtesy of the Keck Observatory.

The researchers are currently engaged in a month-long study of Saturn's auroras and weather, which is changing as the planet's northern hemisphere settles into its seven-year-long spring. They recently used Keck to make a startling discovery — that water "rain" falls into Saturn's atmosphere from the planet's icy rings.

"We are following up on our 'ring rain' observations, probing this complex weather further, and looking to see how Saturn’s northern hemisphere is responding to its spring and oncoming summer season after over 14 years in the cold," team leader Tom Stallard, of the University of Leicester in England, said in a statement.

"We are particularly interested in the strange aurora that the Hubble telescope has seen around the north pole of the planet," he added.

The two 33-foot (10 meters) optical/infrared Keck telescopes are located on the summit of Mauna Kea in Hawaii. They feature a suite of high-tech instruments, including an advanced adaptive-optics system that allows the telescopes to compensate for the blurring caused by Earth's atmosphere.

The Saturn aurora study is a collaboration involving the University of Leicester, NASA and the European Southern Observatory (ESO). In addition to Keck, the astronomers are studying observations by NASA's Hubble Space Telescope and Cassini Saturn-orbiting spacecraft, the ESO's Very Large Telescope in Chile and NASA's Infrared Telescope Facility in Hawaii.