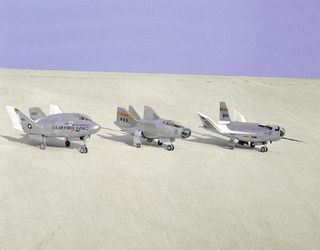 In this historical photo from the U.S. space agency, the wingless lifting body aircraft are sitting on Rogers Dry Lake at what is now NASA's Dryden Flight Research Center, Edwards, California, in 1969.

From left to right are the X-24A, M2-F3 and the HL-10. The lifting body aircraft studied the feasibility of maneuvering and landing an aerodynamic craft designed for reentry from space. These lifting bodies were air launched by a B-52 mother ship, then flew powered by their own rocket engines before making an unpowered approach and landing. They helped validate the concept that a space shuttle could make accurate landings without power.