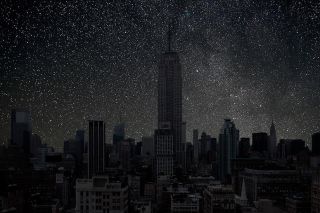 Starlight shines through the windows of the Empire State Building in this photo of a darkened New York City.
(Image: © Thierry Cohen and Danziger Gallery )

NEW YORK — It's a common refrain among city dwellers: "I don't think I remember what the stars look like."

But an exhibition here at the Danzinger Gallery called "Darkened Cities" may help New Yorkers see what the truly dark night sky might look like in their own backyard. Artist Thierry Cohen takes city skylines and meticulously transforms them into something impossible to view today, yet still scientifically sound.

"He photographs the world’s major cities, seeking out views that resonate for him and noting the precise time, angle, and latitude and longitude of his exposure," Danziger Gallery officials wrote in a press release. "As the world rotates around its axis, the stars that would have been visible above a particular city move to deserts, plains and other places free of light pollution."

Over the course of three years, Cohen photographed cities and remote areas of the world by night.

He tracked the rotation of the Earth to seek out the same piece of sky he had shot above a city when it appeared over clear, light pollution-free places like Joshua Tree National Park, the Mojave Desert and Death Valley Desert in California, Black Rock Desert in Nevada and the Atacama Desert in Chile.

Cohen then combined the two photos to create a unique view of what the world could look like if free from human-made light.

"Compositing the two images, Cohen creates a single new image full of resonance and nuance," Danziger Gallery officials wrote. "The work is both political and spiritual, questioning not only what we are doing to the planet but drawing unexpected connections between disparate locations."

Cohen's photos vacillate between extremes. Some look almost post-apocalyptic, others are simply surreal and beautiful, while a few find the sweet spot in between.

The highways of Shanghai look spooky when empty at night, but there might not be anything more surprising than seeing starlight shine through the windows of the Empire State Building. In a photo of Los Angeles, some of the stars are blotted out by the Sierra Nevada Mountain range in the distance, but the clouds of the Milky Way still crowd above the city.

All of the photos, from a starscape prominently featuring the Milky Way over the Brooklyn Bridge to the southern sky over Sao Paulo, are evocative in their own ways.

"Cities that never sleep are made up of millions of individuals breaking natural cycles of work and repose," officials from the New York gallery wrote. "Cohen's photographs attempt to restore our vision, and in beautifully crafted prints and images offer the viewer a possibility — to re-connect us to the infinite energy of the stars."

Cohen's photos will be on display at the Danziger Gallery until May 4.