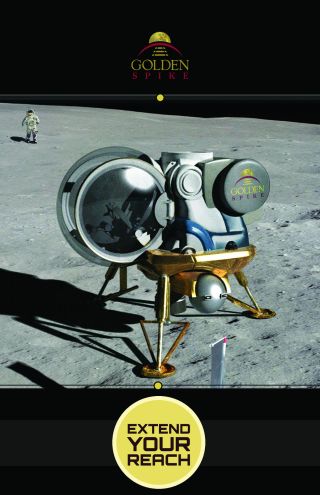 Alan Stern, a planetary scientist and former NASA executive, is the president and CEO of Golden Spike and he contributed this article to Space.com's Expert Voices: Op-Ed & Insights.

I've been involved in "big science" for more than 20 years, having led or personally participated in science teams for 24 suborbital, orbital and planetary space missions with a total value of over $3 billion.

I'm a planetary scientist and a former NASA associate administrator, and when I led all of the agency's science programs, I had a budget of more than $5 billion.

These days, I'm still doing big science, but I'm spending time at the other end of the funding-scale spectrum: I'm a science crowdfunder.

For the uninitiated, crowdfunding is an online phenomenon that allows anybody with a few bucks to spare to contribute toward the budget of a project, usually a startup, seeking cash. Anybody with an idea can go to one of dozens of specialized crowdfunding websites and appeal to the general public for donations, usually in small denominations, and usually in exchange for T-shirts, project participation or other small giveaways. It's kind of a National Public Radio-style fundraising campaign involving the entrepreneurial masses.

I got involved in crowdfunding to give birth to a whole range of ongoing space research and education projects, starting a company called Uwingu. Currently, I am working to fund a new commercial space venture — the Golden Spike Company — as it begins to enable humans to once again explore the moon. Golden Spike is the world's first aerospace firm planning to sell human lunar expeditions to countries, corporations and individuals around the world.

Crowdfunding has become hugely popular. According to the industry website Crowdsourcing.org, there were 452 crowdfunding platforms active worldwide as of last April. In 2011 alone, crowdfunding raised nearly $1.5 billion. That amount doubled to $3 billion by the end of 2012, and looks set to rise further in 2013.

Artists of many stripes quickly embraced crowdfunding as a way to cultivate an audience for their work, even before hammering the first chisel mark into a sculpture. Similarly, social causes and individuals with innovative business ideas also quickly adopted crowdfunding. But, scientists and research teams have been far more reticent — even skeptical — of appealing to nonscientists for project support in recent years.

However, harsh financial realities — including repeated cuts in government-funded research and technology programs and a reluctance of big companies to spend funds outside narrow areas of interest — have forced a rethink. What more and more scientists are now discovering, as I did, is that engaging the public can be stimulating, rewarding, consequential and even inspiring, and it's a trend that's likely to grow.

That was the experience I had last year when seven colleagues and I launched the Uwingu campaign on the Indiegogo.com crowdfunding website. The idea was to create a new funding stream for space researchers and educators outside of the federal agencies that normally fund space research and education, diversifying the funding landscape.

Uwingu's crowdfunding campaign was successful — in fact, it was one of the 25 most successful Indiegogo campaigns ever — with almost $80,000 raised to start the venture. And from that, we've been able to launch our website and begin operations.

What was most rewarding about this experience was the excitement those of us involved in the campaign could sense from the comments and feedback we received from funding supporters.

That's why I've returned to crowdfunding again, this time for the Golden Spike Company. The money we are looking to raise from Indiegogo is largely symbolic: $240,000 represents $1 for every mile from the Earth to the moon, a figure we believe will resonate with people.

By giving the public a chance to directly fund these commercial space efforts, we hope to create a greater sense of public involvement in space exploration. But the money we want to raise is also meaningful and will help us start our business.

In my world — the space world — it's often been said that if there are no bucks, there won't be any Buck Rogers. No doubt.

But what I've now learned through my crowdfunding experience is that there is a corollary to that famous adage: You can't expect Star Trek unless you also make the effort to cultivate its Trekkies.

To participate, or learn more about Golden Spike, visit our Indiegogo website — the campaign ends in just two weeks.