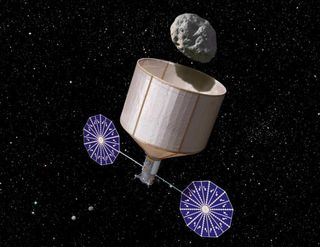 NASA will likely get $100 million next year to jump-start an audacious program to drag an asteroid into orbit around the moon for research and exploration purposes, U.S. Senator Bill Nelson says.

The $100 million will probably be part of President Barack Obama's federal budget request for 2014, which is expected to be released next week, Nelson (D-FL) said. The money is intended to get the ball rolling on the asteroid-retrieval project, which also aims to send astronauts out to the captured space rock in 2021.

"This is part of what will be a much broader program," Nelson said Friday (April 5), during a visit to Orlando. "The plan combines the science of mining an asteroid, along with developing ways to deflect one, along with providing a place to develop ways we can go to Mars."

NASA's plan involves catching a near-Earth asteroid (NEA) with a robotic spacecraft, then towing the space rock to a stable lunar orbit, Nelson said. Astronauts would then be sent to the asteroid in 2021 using NASA's Orion capsule and Space Launch System rocket, both of which are in development.

The idea is similar to one proposed last year by researchers based at Caltech's Keck Institute for Space Studies in Pasadena.

"Experience gained via human expeditions to the small returned NEA would transfer directly to follow-on international expeditions beyond the Earth-moon system: to other near-Earth asteroids, [the Mars moons] Phobos and Deimos, Mars and potentially someday to the main asteroid belt," the Keck team wrote in a feasibility study of their plan.

NASA will need much more than this initial $100 million to make the asteroid-retrieval mission happen. The Keck study estimated that it would cost about $2.6 billion to drag a 500-ton space rock back near the moon.

Nelson said he thinks the Obama Administration is in favor of the asteroid-retrieval plan. In 2010, the president directed NASA to work to get astronauts to a near-Earth asteroid by 2025, then on to the vicinity of Mars by the mid-2030s.

News of the potential $100 million allocation is not a complete surprise, as Aviation Week reported late last month that NASA was seeking that amount in 2014 for an asteroid-retrieval program.