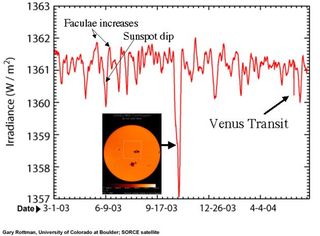 A graph of sunlight shows dips during sunspots, and the increases that surround those dips due to plage (also called faculae). Also shown: decrease in sunlight during the transit of Venus.

When Venus crossed the Sun June 8, showing up as a clear black dot to the delight of millions of skywatchers around the world, astronomers noted something less obvious: The amount of sunlight reaching Earth dipped by 0.1 percent for a few hours.

The result was not a surprise, but since Venus hadn't transited the Sun in more than a century, the effect had never been measured.

The drop in sunlight was similar to what happens when a large sunspot crosses the solar surface. But these forms of natural sunblock don't behave as you might expect, as witnessed by folks who froze their tails off a few hundred years ago across much of the Northern Hemisphere.

Sunspots are cool, dimmer regions of the solar surface, packed with pent-up magnetic energy that sometimes unleash storms of X-rays and superheated gas. When they transit the face of the Sun, they are often visible without magnification to skywatchers using safe viewing techniques (looking directly at the Sun can cause permanent eye damage).

The planets Venus and Mercury, both orbiting inside Earth's path, also transit the Sun.

Sunlight reaching Earth is monitored by NASA's Solar Radiation and Climate Experiment (SORCE) satellite. The Venus transit proved to be a good test of instrument sensitivity.

"Because of its distance from Earth, Venus appeared to be about the size of a sunspot" on June 8, said Gary Rottman, SORCE Principal Investigator and a scientist at the Laboratory for Atmospheric and Space Physics at the University of Colorado at Boulder.

Rottman and colleagues saw greater reductions in the Sun's energy coming Earthward during a stretch of intense solar activity last October, when several huge sunspots generated a record-breaking string of solar flares. At one point, sunlight dimmed 0.3 percent for about four days, due mostly to three large sunspot groups.

"This is an unprecedented large decrease in the amount of sunlight," Rottman said, and it is comparable to the decrease that scientists estimate occurred from roughly 1645 to 1715. During a broader period, from the 1400s to the 1700s, Europe and North America were plunged into what came to be called the Little Ice Age.

Scientists could not measure solar radiation back then. But sunspots were recorded by several astronomers, and Rottman and others believe there is a correlation between the climate of the time and the lack of sunspots.

"For a period of about 50 years, there were almost no sunspots," Rottman said in a telephone interview. "The total amount of radiation was, we assume, about three-tenths of 1 percent less" than in normal periods of solar activity.

If you've been paying attention, that might sound backward. Rottman's team measured a decrease in sunlight when Venus transited the Sun, and similar decreases are recorded when sunspots are present.

So why would there have been less radiation in the late 1600s when there were very few sunspots? Rottman explains:

Sunspots indicate greater solar activity in general. While they do dampen sunlight while on the face of the Sun, they are surrounded by intensely bright regions called "faculae" or "plage." When sunspots are on the limb of the Sun -- just rotating onto or off of the face -- the plage are prominent from our vantagepoint, creating a significant increase in radiation that far outweighs the dip of radiation caused by the rest of the sunspot's transit.

Seen on a graph, total visible and infrared radiation increases just before a sunspot appears, dips slightly for several days as it crosses the surface, then increases again as it disappears.

A lack of sunspots indicates inactivity in the Sun, and less radiation overall.

The reduced solar activity of the 1600s and 1700s is called the Maunder minimum, after the solar astronomer Edward Walter Maunder, who during the 1800s investigated the historical sunspot records.

Nobody knows for sure why it occurred or whether it will happen again anytime soon. In fact, the whole concept remains controversial, because it's not clear how well astronomers were counting sunspots during the Maunder minimum. And the exact tie to climate is not understood. Most tend to agree, however, that there was a distinct lack of solar activity.

"Something very different was happening during the 17th Century, and it produced a much more permanent change in the Sun's energy output at that time," Rottman said.