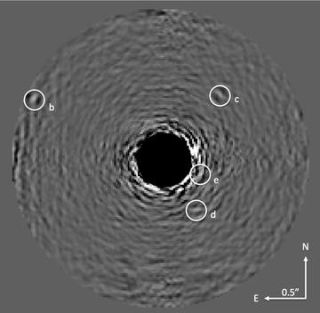 Image of the HR8799 planets with starlight optically suppressed and data processing conducted to remove residual starlight. The star is at the center of the blackened circle in the image. The four spots indicated with the letters b through e are the planets. This is a composite image using 30 wavelengths of light and was obtained over a period of 1.25 hours on June 14 and 15, 2012.
(Image: © American Museum of Natural History)

Scientists have collected the startling chemical fingerprints of four huge alien planets, successfully sifting through the blinding light of their parent star.

The atmospheric composition of the four warm, cloud-covered alien planets orbiting the star HR 8799 — a star five times brighter than our sun that lies 128 light-years away from Earth — took researchers by surprise. The study was unveiled in this week's edition of the Astrophysics Journal.

"These warm, red planets are unlike any other known object in our universe," study leader Ben Oppenheimer, chair of the astrophysics department at the American Museum of Natural History in New York City, said last month in an statement announcing the study. "All four planets have different spectra, and all four are peculiar. The theorists have a lot of work to do now." [The Alien Worlds Around Star HR 8799 (Gallery)]

The four planets are all more massive than Jupiter. At about 1340 degrees Fahrenheit (727 degrees Celsius), they're considered just lukewarm as far as celestial bodies go. With such temperatures, astronomers would expect to see ammonia and methane coexisting in their atmospheres.

The scientists, however, found that the four worlds' atmospheres had either methane or ammonia, not combinations of the two. The planets were also redder than the scientists had expected, which they suspect could be due to their patchy cloud cover.

"In just one hour, we were able to get precise composition information about four planets around one overwhelmingly bright star," study co-author Gautam Vasisht of NASA's Jet Propulsion Laboratory, said in a statement released today (May 9). "The star is a hundred thousand times as bright as the planets, so we've developed ways to remove that starlight and isolate the extremely faint light of the planets."

The team filtered out the brilliant light of HR 8799 using an advanced imaging system at the Palomar Observatory in California called Project 1640. The technique could be a landmark in the study of worlds beyond our own solar system, researchers say.

"In the 19th century it was thought impossible to know the composition of stars, but the invention of astronomical spectroscopy has revealed detailed information about nearby stars and distant galaxies," Charles Beichman, executive director of the NASA Exoplanet Science Institute at the California Institute of Technology in Pasadena, said in a statement.

"Now, with Project 1640, we are beginning to turn this tool to the investigation of neighboring exoplanets to learn about the composition, temperature, and other characteristics of their atmospheres," he added.

Spectra can reveal the makeup of the atmospheres of exoplanets because chemicals like carbon dioxide and methane each absorb light in a different way and accordingly leave their own unique signature in the spectrum.

"Astronomers are now able to monitor cloudy skies on extrasolar planets, and for the first time, they have made such observations for four planets at once," Maria Womack, program director for the division of astronomical sciences at the National Science Foundation, said in a statement. "This new ability enables astronomers to now make comparisons as they track the atmospheres, and maybe even weather patterns, on the planets."

The research, funded in part by the National Science Foundation, is detailed in The Astrophysical Journal.

This story was updated on May 9 to include new comments from NASA's JPL on the study's journal release.