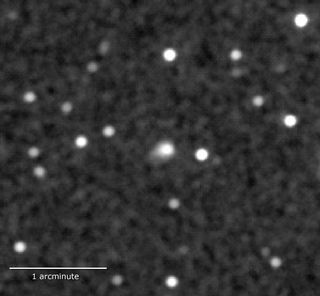 The Ultraviolet/Optical Telescope aboard NASA's Swift imaged comet ISON (center) on Jan. 30, when it was located about 3.3 degrees from the bright star Castor in the constellation Gemini. At the time of this 5.5-minute optical exposure, ISON was about 5,000 times fainter than the limit of human vision. Image released March 29, 2013.
(Image: © NASA/Swift/D. Bodewits, UMCP)

A NASA spacecraft scanning for the most powerful explosions in the universe has captured a photo of Comet ISON, an icy wanderer that could potentially dazzle stargazers when it swings close to the sun later this year.

NASA's Swift satellite, which is typically used to track intense gamma-ray bursts from distant stars, photographed Comet ISON on Jan. 30, with the space agency unveiling the photo today (March 29). By tracking the comet over the last two months, Swift has allowed astronomers to learn new details about how large the comet is and how fast it is spewing out gas and dust.

"Comet ISON has the potential to be among the brightest comets of the last 50 years, which gives us a rare opportunity to observe its changes in great detail and over an extended period," said Lead Investigator Dennis Bodewits, an astronomer with University of Maryland at College Park (UMCP) who helped obtain the new image.

Some astronomers have predicted that ISON could be the "Comet of the Century" when it makes its closest approach to the sun in late November. But a recent analysis found that the comet is not brightening as expected, and may have a ways to go to meet such expectations.

Bodewits and his university colleagues teamed up with the Lowell Observatory in Flagstaff, Ariz., to capture new views of Comet ISON using the Swift spacecraft. The satellite's Jan. 30 photo shows the comet as a bright, fuzzy white ball. At the time, Comet ISON was about 375 million miles (670 million kilometers) from Earth and 460 million miles (740 million km) from the sun.

"Using images acquired over the last two months from Swift's Ultraviolet/Optical Telescope (UVOT), the team has made initial estimates of the comet's water and dust production and used them to infer the size of its icy nucleus," NASA officials wrote in a statement.

Swift's observations revealed that Comet ISON is currently shedding about 112,000 pounds (51,000 kilograms) of dust and about 130 pounds (60 kg) of water every minute, an odd mismatch for such an anticipated comet.

All comets are made of dust and frozen gases that mix together to form a sort of "dirty snowball" in space, NASA officials explained. Water ice in comets typically stays frozen until the comet approaches within three times the Earth's distance to the sun, at which time the water ice heats up and changes directly into gas (a process called sublimation), creating jets of material that can brighten the comet.

"The mismatch we detect between the amount of dust and water produced tells us that ISON's water sublimation is not yet powering its jets because the comet is still too far from the sun," Bodewits said. "Other more volatile materials, such as carbon dioxide or carbon monoxide ice, evaporate at greater distances and are now fueling ISON's activity."

Currently, Comet ISON is about 5,000 times fainter than the dimmest object the human eye can see.

NASA's Swift spacecraft is one of several satellites and probes to observe Comet ISON as it passes through the inner solar system. The space agency has formed the Comet ISON Observing Campaign (CIOC) to make the most of the comet's visit.

On Oct. 1, the comet will pass within 6.7 million miles (10.8 million km) of Mars, and may be spotted by orbiters around the Red Planet. [Comet ISON's Path Through Solar System (Video)]

On Nov. 28 — 58 days after swing close by Mars — Comet ISON will make its closest approach to the sun, flying within 730,000 miles (1.2 million km) of the star's surface during the encounter. Several sun-watching observatories will be tracking the comet at that time, and ISON may even become visible in the daytime sky to observers who block the sun's light with their hand, NASA officials said.

The comet will make its closest approach to Earth on Dec. 26, coming with 39.9 million miles (64.2 million km) of the planet as a late Christmas present.

But whether Comet ISON will live up to its celestial hype or fizzle out in a whimper still remains to be seen, astronomers warned. The comet must still survive the approach into the inner solar system, as well as its close encounter with the sun.

"It looks promising, but that's all we can say for sure now," Matthew Knight, an astronomer at Lowell Observatory said. "Past comets have failed to live up to expectations once they reached the inner solar system, and only observations over the next few months will improve our knowledge of how ISON will perform."

Editor's note: If you snap an amazing photo of Comet ISON or any other celestial object, and you'd like to share for a possible story or image gallery, please send images and comments, including location information, to Managing Editor Tariq Malik at spacephotos@space.com.