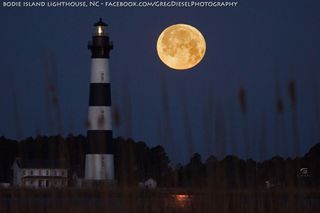 The first full moon of the new spring season comes tonight (March 27), and it plays a surprisingly important role for the upcoming Easter Sunday.

The moon officially turned full at 5:27 a.m. EDT (2:27 a.m. PDT, or 0927 GMT), but your first view of the full moon at night will likely come later this evening. Traditionally, the March full moon is known as "Worm Moon," supposedly because when the ground softens, the earthworm casts reappear, inviting the return of the robins. But because of its association with Easter, it's also known as the Paschal Moon.

Other lunar monikers for this month include "Crow Moon," (when the cawing of crows signals the end of winter), "Crust Moon," (because the snow cover becomes crusted from thawing by day and freezing at night) and "Sap Moon," (marking the time of tapping maple trees).

Traditional names for the full moons of the year are found in some publications such as The Farmers' Almanac. We also published the full list of full moon names here on SPACE.com earlier this year. The origins of these names have been traced back to Native Americans, though they may also have evolved from old England or, as Guy Ottewell, editor of the annual publication "Astronomical Calendar" suggests, "writer's fancy." [10 Suprising Moon Facts You May Not Know]

The first full Moon of spring is also sometimes referred to as the Paschal Full Moon, because it is the moon used to set the date of Easter in a given year. This year, if you have not already noticed, Easter will arrive a bit on the early side, on March 31. The earliest Easter in our lifetimes came five years ago, on March 23 (the last time that Easter fell this early in the calendar was 1913, and before that, in 1856).

Which leads us to ask the question, exactly just how is the date of Easter determined?

Equinox and the full moon

Following these rules, we find that Easter can fall as early as March 22 and as late as April 25 in any given year. Pope Gregory XIII decreed this in 1582 as part of the Gregorian calendar.

This year the Paschal Full Moon falls today, so according to the current ecclesiastical rules, Easter is to be celebrated four days later, on Sunday, March 31.

Hence, there can sometimes be discrepancies between the ecclesiastical and astronomical rules for dating Easter. In the year 2038, for instance, the equinox falls on March 20, with a full moon the next day, so astronomically speaking, Easter should fall on March 28 of that year. In reality, however, as mandated by the rules of the Church, Easter in 2038 will be observed as late as it can possibly come, on April 25!

So in practice, the date of Easter is determined not from astronomical computations, but rather from other religious formulas such as Epachs and Golden Numbers. In 2013, we are in Epach 17 and the Golden Number is 19. [Who Observes Easter? (Infographic)]

Since the beginning of the 20th century, a proposal to change Easter to a fixed holiday rather than a movable one has been widely circulated, and in 1963 the Second Vatican Council agreed, provided a consensus could be reached among Christian churches. The second Sunday in April has been suggested as the most likely date.

Interestingly, the fact that Easter occurs at a time of the year when weather patterns are transitioning from winter to spring, means a wide variation in the type of weather that can be expected, depending upon just when the holiday falls in a given year. Ask somebody what type of weather immediately comes to mind when Christmas is mentioned, and likely the answer will be cold and snowy. For the Fourth of July, it's probably sunny and hot.

Yet Easter can feature both of these extremes!

In 1970, Easter fell on March 29. In that year, a snowstorm hit the northeastern United States. In New York City, the famous Easter Parade had to be cancelled, as four inches of snow fell, with as much as a foot of the white stuff in the northern suburbs.

And yet, just six years later, in 1976, Easter fell on April 18, which ended up going down in New York weather annals as the hottest Easter on record. Not only was the 96-degree Fahrenheit reading that day the hottest temperature recorded in Central Park that year, it was also the very first (and only time) that New York held the distinction of being the hottest location in the United States!

Editor's note: If you have an amazing picture of the full moon or any other night sky view that you'd like to share for a possible story or image gallery, send photos, comments and your name and location to managing editor Tariq Malik at spacephotos@space.com.