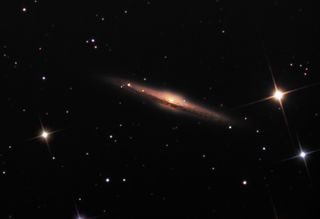 Based in Western Michigan, avid astrophotographer Terry Hancock teamed up with former NASA scientist Fred Hermann of Huntsville, Ala., to take this photo. They used an AT 12" Ritchey-Chrétien astrograph telescope and cameras with a KAF8300 chip to capture the image. Hermann used a QSI 683 to capture luminance while Hancock used a QHY9 to shoot some luminance and RGB.  The total exposure time was three hours. The image was taken March 19 from Bridgeton, Mich.