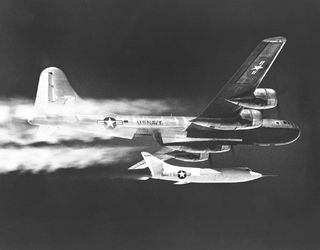 A NACA research aircraft is launched for a test flight.
(Image: © NACA.)

In this historical photo from the U.S. space agency, the D-558-2 #2 is launched from the P2B-1 in this 1956 NACA High-Speed Flight Station photograph. The D-558 Phase Two aircraft was quite different from its Phase One predecessor, the Skystreak.

German wartime aeronautical research records, reviewed in 1945 by Douglas Aircraft Company personnel, pointed to many advantages gained from incorporating sweptback wing design into future research aircraft. These findings along with wind tunnel studies performed by the National Advisory Committee for Aeronautics (NACA) at Langley Memorial Aeronautical Laboratory, resulted in the modification of the straight wing D-558-1 Skystreak contract to include investigation of sweptback wings.

Three redesigned aircraft were built by Douglas Aircraft Company under a contract from the Navy Bureau of Aeronautics and named D-558-2 Skyrocket. Originally all three were designed for ground take-off and used mixed power propulsion systems, consisting of a turbojet engine for take-off and a rocket engine, for greater speed in flight. The early flight tests were made using only the turbojet engine with the rocket engines added, when available.

As the flight program evolved, only one D-558-2 ended-up powered by a mixed rocket and turbo-jet propulsion system. From the experience gained during the X-1 rocket program and from Skyrocket mixed propulsion flights, the Navy and the NACA proceeded to have all three of the D-558-2 aircraft modified for air launching from a Navy-operated P2B-1 Superfortress (Navy version of the Air Force B-29), later becoming NACA 137. Although not designated an "X vehicle," the D-558-2 was essentially an X-vehicle aircraft in design and function, and contributed much to aeronautics research.