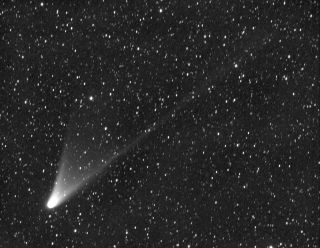 Comet Pan-STARRS in the Northern Sky

It may not be the brightest comet in recent memory, but comet Pan-STARRS put on quite a show in the Southern Hemisphere, and now it's moving north.

Here are a few things to remember about this rare naked-eye comet:

You Will Never See it Again

Comet Pan-STARRS has an elliptical orbit around the sun that will likely leave it in a 110,000-year path around the sun. It likely took millions of years to make its way into the inner solar system, however. That means if you miss it this year, you'll have to find the secret of immortality to try and catch Pan-STARRS on its next pass. [How to See Comet Pan-STARRS]

NEXT: It's From the Oort Cloud

It Comes from the Oort Cloud

The Oort cloud is a mass of icy bodies orbiting the sun out to a distance of about 93 trillion miles (150 trillion km) away - about 100,000 astronomical units - according to NASA. It gave birth to Comet Pan-STARRS, which was flung from the cloud into an orbit that will bring it closer to the sun than it has ever been before. [Comet Pan-STARRS Explained (Infographic)]

NEXT: A Sungrazing Comet

It is a 'Sungrazing' Comet

Pan-STARRS and other comets from the Oort cloud like it come so close to the sun that they get close to breaking apart. If they survive their close encounters with the star, however, they could shine more brightly than most other objects in the sky. [Comet Pan-STARRS Observing Tips (Video)]

NEXT: It Almost Faded Away

It Almost Disappeared from View

Astronomers thought that Comet Pan-STARRS wouldn't brighten in the northern sky. Some predicted that the comet's magnitude would fade, making it difficult to see once it passed above the equator, but now scientists expect that the comet may brighten even more when it passes about 28 million miles (45 million km) from the sun on Sunday, March 10 and be visible throughout March before fading in April. [Amazing Photos of Comet Pan-STARRS

NEXT: It's Not Alone

One of Three Comets This Year

In the Southern Hemisphere, Pan-STARRS was seen in the same part of the sky as Comet Lemmon.

Come November, after Pan-STARRS has faded from view, Comet ISON could put on the show of a generation, shining more brightly than any comet in recent memory, if predictions hold true. [FULL STORY: 2013 Is Year of the Comets]

Not Around for Long

After Pan-STARRS makes its closest brush with the sun on March 10, the comet will begin to dim. Skywatchers with telescopes and binoculars might still be able to see the sungrazer until early April, but it will fade out of naked-eye visibility before the end of March.

Editor's note: If you snap an amazing photo of Comet Pan-STARRS, or any other celestial object, and you'd like to share it for a possible story or image gallery, please send images and comments, including location information, to managing editor Tariq Malik at spacephotos@space.com.