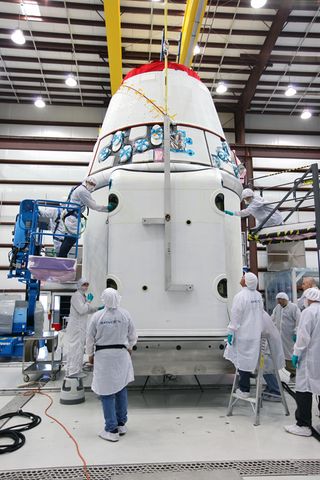 The spacecraft will launch on the upcoming SpaceX CRS-2 mission. The flight will be the second commercial resupply mission to the International Space Station by SpaceX. This image was released Jan. 14, 2013.
(Image: © NASA/Kim Shiflett)

"The mission is the second of 12 SpaceX flights contracted by NASA to resupply the International Space Station," NASA officials said in a mission update. "It will mark the third trip by a Dragon capsule to the orbiting laboratory, following a demonstration flight in May 2012 and the first resupply mission in October 2012."

SpaceX has a $1.6 billion contract with NASA to provide 12 unmanned cargo deliveries to the space station. Another company, Orbital Sciences Corp. based in Virginia, has a $1.9 billion contract for eight mission using its own Antares rocket and Cygnus spacecraft.

The Dragon spacecraft is expected to deliver 1,200 pounds  (544 kilograms) worth of supplies to the six international crewmembers on board the station. The capsule is scheduled to return to Earth with 2,300 pounds (1,043 kg) of material from the space station when it splashes down in the Pacific Ocean off the coast of Baja California on March 25.

SpaceX conducted a successful rocket engine test, known as a "static test fire" on Monday (Feb. 25). The rocket's 9 Merlin engines were fired for a few seconds while the rocket was held down on the launch pad.

NASA is relying on SpaceX, Orbital Sciences and other private companies to develop new private spacecraft to supply the International Space Station with cargo and ultimately ferry American astronauts into and from low-Earth orbit.

The space agency is also developing a new rocket and spacecraft, the Orion space capsule and its Space Launch System mega-rocket, for future deep-space exploration missions to the moon, asteroids and Mars.