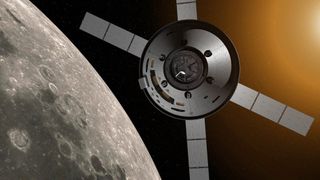 NASA’s Orion spacecraft will carry astronauts further into space than ever before using a module based on Europe’s Automated Transfer Vehicles (ATV). ATV’s distinctive four-wing solar array is recognisable in this concept. The ATV-derived service module, sitting directly below Orion’s crew capsule, will provide propulsion, power, thermal control, as well as supplying water and gas to the astronauts in the habitable module.
(Image: © NASA)

A new NASA project office is taking a close look at what vital technologies the space agency needs to fulfill its deep-space exploration goals, including sending astronauts beyond low-Earth orbit.

Called the Space Technology Mission Directorate (STMD), the new office aims to produce "new inventions, new capabilities and the creation of a pipeline of innovators aimed at serving future national needs," NASA officials said in a statement. The directorate's research and development efforts will take place within NASA facilities, universities and private companies, and they will involve collaborative projects with international partners, agency officials added.

"A robust technology development program is vital to reaching new heights in space — and sending American astronauts to new destinations like an asteroid and Mars," NASA Administrator Charles Bolden said in a statement last week.

President Barack Obama has directed NASA to work toward launching astronauts to an asteroid by 2025, and then take aim at a manned Mars mission in the 2030s. NASA is developing a new spacecraft, the Orion deep-space capsule, and a giant rocket called the Space Launch System to serve as core vehicles for the ambitious space exploration program.

The first Orion test flight will launch in 2014 and be an unmanned mission. The first Space Launch System test is slated for 2017 and could fly a robotic deep-space flight around the moon.

"A top priority of NASA is to invest in cross-cutting, transformational technologies. We focus on collaboration with industry and academia that advances our nation's space exploration and science goals while maintaining America's competitive edge in the new innovation economy," Bolden added.

The STMD will be headed by NASA associate administrator Michael Gazarik, who previously served as the agency's the director of the Space Technology Program within the Office of the Chief Technologist.