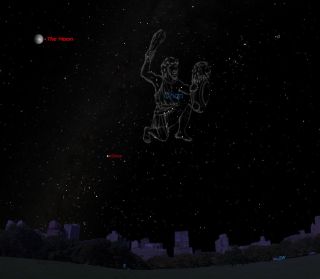 This sky map shows the location of Sirius, the brightest star in the night sky, as it will appear at 8 p.m. local time to stargazers at mid-northern latitudes.
(Image: © Starry Night Software)

Around this time of year, I often get lots of inquiries concerning a certain very bright star-like object shining over toward the southern part of the sky. It's Sirius, the Dog Star, the brightest star in the night sky.

Granted, the planet Jupiter currently shines three times brighter and appears much higher in the sky, but while Jupiter shines with a steady, silvery glow, Sirius will remind you of the famous early 19th century limerick, "Twinkle Twinkle Little Star" written by the English poet, Jane Taylor, for indeed, Sirius seems to shine "like a diamond in the sky."  Who knows?  Maybe Taylor was inspired by gazing upon Sirius.

Not a few astronomy books suggest that you can locate Sirius by using the belt of Orion, as the belt points southeast directly toward Sirius — as if anyone needed a way to find this dazzling luminary! While it is true that Orion's three-star belt will direct you toward Sirius, all anyone needs to do is simply cast a glance toward the southern sky during these cold winter evenings and they'll immediately see it. It will be due south between 8:30 and 9 p.m. local time all of this week, and sets in the southwest between 1:30 and 2 a.m.

So bright, so near

Sirius is the brightest star of the constellation Canis Major, the "Greater Dog" in Latin.

According to Burnham's Celestial Handbook, other names for it include "The Sparkling One" or "The Scorching One." The star appears a brilliant white with a tinge of blue, but when the air is unsteady, or when the star is low to the horizon, it seems to flicker and splinter with all the colors of the rainbow.

At a distance of just 8.7 light-years, Sirius is the fifth-nearest known star. Among the naked-eye stars, it is the nearest of all, with the sole exception of Alpha Centauri. Sirius is gradually moving closer to the solar system, so it will slightly increase in brightness over the next 60,000 years. After that time its distance will begin to recede, but it will continue to be the brightest star in the Earth's sky for the next 210,000 years. [The Nearest Stars to Earth (Infographic)]

The Dog Star has a pup

Over thousands of years, Sirius appears to move in a wavy line across the sky.

In 1862, Alvan G. Clark first saw Sirius B, also known as "the Pup," the companion star responsible for the wiggle. Sirius B is only one ten-thousandth as bright as Sirius A, but by 1914, spectroscopic observations had demonstrated that its temperature was about the same. From physical laws it follows that B emits the same amount of light per unit surface area as A, and therefore to be so dim, it must be very small.

Later calculations have shown that A has just over twice the mass of our sun, but B has nearly one solar mass. Since it is so small, B must be exceedingly dense.

In fact, it packs 98 percent of one solar mass into a body just 2 percent of the sun's diameter. To do that, Sirius B must have a density 90,000 times that of the sun. A teaspoon of this star material would weigh about 2 tons!

Canopus still holds its rank as second only to Sirius in apparent brightness. The two stars differ by 0.8 magnitudes, so that Canopus is about half as bright as Sirius. But the former is more than 34 times as distant from us.

And, in fact, intrinsically, the luminary in Carina outshines the one in Canis Major by about 600 times.  This week, if you are anywhere south of north latitude 37.6 degrees, you can get a glimpse of Canopus as it skims just above the southern horizon, almost directly south of Sirius around 8:30 p.m.