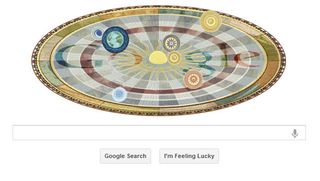 In the early 1500s, famed Polish astronomer Nicolaus Copernicus first proposed that the Earth was not the center of the universe — a revelation that, more than 500 years later, has catapulted the 16th century scientists into the center of the Google-verse.

The Internet search giant Google honored Copernicus' paradigm-shifting model of the cosmos today with a unique dynamic "doodle" that animates the motion of the solar system's planets around the sun. The Copernicus doodle went live on Copernicus' 540th birthday.

Nicolaus Copernicus was born on Feb. 19, 1473, and traveled to Italy at age 18 to attend university. At that time, the prevailing theory of the cosmos stated that the planets (not to mention the sun) all circled the Earth, which was at the center of the universe.

At the University of Bologna, Copernicus studied astronomy under professor Domenico Maria de Novara, during which time he helped observe the night sky. After return to his native Poland to serve as a cleric in Frauenburg, he continued his astronomical observations using a observatory in the tower in which he lived. [The Greatest Astronomers of All Time]

Copernicus is perhaps best known for his work on the motion of solar system planets. The prevailing model — that the Earth was at the center of the universe — resulted in a complicated view of the solar system in order to account for the apparent backward motion of some planets across the sky. This "retrograde motion," as it was called, was explained by confusing circles within circles (called epicycles) by the Greek astronomer Ptolemy.

But Copernicus' model streamlined the solar system by proposing that the Earth was not the center of the universe — a heretical view at the time. Instead, Copernicus proposed that the center was near the sun, and that all the planets (Earth included) revolved around it. He also proposed that that it was the Earth's motion around the sun that caused other planets to appear as if they moved backward — a theory later proven correct.

The Copernican model of the solar system is also known as the heliocentric model. While Copernicus still got some details incorrect (he assumed the orbits of planets were perfect circles, not the ellipses we know today, which still required epicycles), it did lay the foundation for future astronomers.

Copernicus documented his theory in handwritten notes to friends in 1514, when he would have been about 41 years old. It was not until he was 70 and near death that Copernicus formally published his proposal in the book "On the Revolutions of the Heavenly Spheres."

Despite Copernicus' work, nearly 100 years later Italian astronomer Galileo Galilei found himself in trouble with Catholic church authorities in 1632 when he also proposed that Earth orbited the sun. Both astronomers were ultimately vindicated, leading to the modern understanding of solar system mechanics scientists have today.