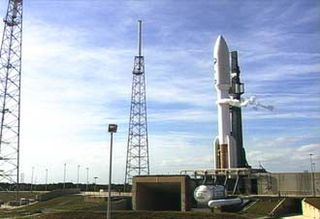 The plannedlaunch of NASA's first probe bound for Pluto has been delayed another day dueto an early morning power outage at the spacecraft's Maryland-based mission controlcenter Wednesday.

Sittingatop a Lockheed Martin-built Atlas 5 rocket, the NewHorizons spacecraft is now set to Jan. 19 at 1:08 p.m. EST (1808 GMT) based on an afternoon decision by mission managers, NASA officials said. The spacecraft was previouslyslated to lift off today at 1:16 p.m. EST (1816 GMT) after high winds foileda Tuesday launch attempt.

"We've beenworking on this for 17 years so I don't think a couple of days are going tohurt us," New Horizons principal investigator Alan Stern, of the SouthwestResearch Institute, told SPACE.com.

Severe storms knocked out power to the New Horizons mission control center at the Johns Hopkins University's Applied Physics Laboratory in Laurel, Maryland, NASA officials said in a statement. While the center was on backup power, New Horizons mission managers want to ensure the site has sufficient backups before pressing forward with critical events like launch and early flight operations, they added.

"It's likea double whammy," APL spokesperson Helen Worth said of the launch delay in a telephone interview. "Allwe can do is try again tomorrow. People here are disappointed and this was totallyout of left field."

NASA's NewHorizons spacecraft has a wide launch window that extends until Feb. 14.Mission managers would like to launch the spacecraft by Feb. 2, which wouldallow New Horizons to take advantage of a gravity boost during Jupiter flybyslated for early next year. If the probe launches by Jan. 28, it could reachPluto by 2015.