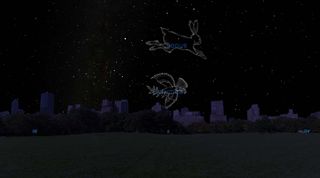 This night sky map shows the location of the constellations Lepus (the Hare) and Columba (the Dove) at 9 p.m. local time for stargazers at mid-northern latitudes. The constellations are located just below the famed Orion star pattern.
(Image: © Starry Night Software)

In writing about the early winter nighttime sky, it's difficult not to mention Orion the Mighty Hunter, surrounded by a large retinue of other bright stars.  Indeed, Orion is the star pattern that always takes center stage on cold wintry nights: He is the most spectacular star pattern of the winter season, and the most brilliant constellation to be found anywhere in the sky.

But unfortunately, Orion tends to draw attention away from some nearby dimmer groups, such as the two somber figures that lie just beneath the Hunter: Lepus, the Hare and Columba, the Dove.

Lepus is composed of a modest group of faint stars that seem to be arranged in the shape of a bow tie.  Orion's sword points toward it. It's an ancient pattern and for some reason a surprising number of early peoples tended to associate this celestial Hare with the moon, although to the Arabs the brighter stars in a crude rectangle represented four camels quenching their thirst.

And since Orion particularly liked hunting hares, it seemed rather appropriate to place one below his feet in the sky. [Gallery: The Splendor of the Orion Nebula]

Lepus' brightest star, Arneb, is a double star whose components are about 3rd and 11th magnitude (in this astronomers' brightness scale, the lower the number, the brighter the star. The limit of naked-eye visibility is generally considered to be 6th magnitude).

Yet Arneb is not really a true binary star at all. This is only an illusion, for the fainter companion is probably not a true physical companion but only appears that way because it just happens to be in the same line of sight as seen from here on Earth.

One interesting variable star is labeled R Leporis. It is often compared to Mira Ceti, the "Wonderful Star" of Cetus, the Whale, because, like Mira Ceti, R Leporis appears to pulsate in size and has an irregular period of roughly 432 days, varying in brightness between about 7th and 9th magnitude.

It was first noted in October 1845 by the astronomer J.R. Hind of London, who described it as "the most intense crimson, resembling a blood-drop on the black background of the sky."  Other observers have noted that it appears as "an intense smoky red; a glowing coal; a ruby."

Observing it more than a century ago in 1905, Agnes Clerke remarked that even the ruddy colors of Antares and Betelgeuse were "mere pale shades" when compared with the wine-red hue of R Leporis.

Hind's Crimson Star is a very cool giant, ranging from 3,500 to 4,000 degrees Fahrenheit (1,900 to 2,200 degrees Celsius). Its spectrum shows that it belongs to a rare class of stars referred to as spectral class N, and shows very strong features of molecular carbon.

In contrast to Lepus, Columba is not among the 48 constellations usually attributed to the ancients. Its origin is uncertain, but it is believed to have been named by Petrus Plancius, a sixteenth century Dutch theologian and mapmaker. It indeed does appear as a full-blown dove with olive branch in many of the old star atlases.

Interestingly, just to the east of Columba is the constellation of Puppis, which represents the stern of a large sailing vessel, Argo Navis.

For observers in the northern United States as well as all of Canada and Europe, the various components of this celestial ship lie, for the most part, below the horizon. Although Jason used this ship to seek the Golden Fleece, it is sometimes associated with Noah's ark. And indeed, Columba is supposed to represent the dove Noah sent forth after the flood to search for land, hence its original name: Columba Noachii ("Noah's Dove").

A final point about Columba is that within its boundaries is the place from which the sun is moving, called the "antapex of the Sun's way."

In 1718, Sir Edmund Halley determined that the stars were not fixed in position and that they moved across the sky in what is often called their proper motion. Relative to the nearby stars, the sun, and thus the Earth as well, are moving directly away from a spot in the sky in northern Columba at about 12.5 miles per second. We are heading toward the opposite part of the sky, a region of space between the summertime constellations of Lyra, the Lyre and Hercules.