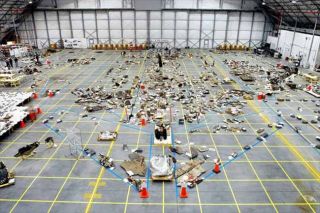 Instead, the Columbia debris will be carefully stored and made available for scientific research at universities and laboratories around the world, Mike Leinbach, NASA's launch director at Kennedy Space Center, said Monday.

"We want this research to be another legacy for the crew," Leinbach said.

The details still need to be worked out, but once the Columbia Accident Investigation Board  is finished with its work and the debris is no longer needed, the wreckage will be loaned out in the name of science in much the same way as NASA's collection of lunar rocks.

Leinbach said the Columbia debris would be available for researchers in such diverse fields as metallurgy and hypersonic flow analysis.

When Columbia broke up  over Texas on Feb. 1, the resulting shower of parts traveled through the upper region of Earth's atmosphere at speeds they were never designed to experience. As a result, burned into the edges, stamped on their sides or eroded from the surfaces are a variety of clues about the physics and chemistry of what occurs during rapid reentry at that height.

The research could help improve the design of future spaceships, Leinbach said.

More than 2,000 pieces of shuttle debris have been identified and cataloged at KSC, and those parts that might help in the accident investigation are being laid out on the floor of a hangar near the Shuttle Landing Facility.

Thousands more are still being worked on, or are en route to the space center from staging areas in Texas. Although the pace at which fresh debris is arriving in Florida is reduced.

"The debris trail is slowing," said Leinbach, noting that the ground search and recovery effort will continue for just a few more weeks.

Some 5,000 people are still combing difficult terrain to look for Columbia parts, which officials have repeatedly said are critical to the investigation.

"Those people are the real heroes in this story," Leinbach said.

While the recovery and reconstruction work continues, Leinbach said he has some folks looking into the details of finding a place to store Columbia's parts and determining the process needed to allow researchers access to Columbia debris samples.

Leinbach said it's not clear if any parts of Columbia will ever be made available for public display by such institutions as the National Air and Space Museum.

Debris recovered from the 1986 Challenger disaster was reconstructed in an office warehouse facility at KSC and then eventually buried in an abandoned Minuteman missile silo at nearby Cape Canaveral Air Force Station.

Much of Challenger, including one entire wing, remains at the bottom of the Atlantic Ocean offshore of KSC. Any parts of the shuttle that wash up on area beaches from time to time eventually make their way into the silo.

In the days following the Columbia tragedy many local Space Coast workers assumed the debris would be added to the Challenger silo or buried in another silo at the same site.

Leinbach said he and his team don't want to see that happen because there still is so much more that can be learned from Columbia, and that mission of exploration doesn't have to end just because Columbia  will never fly again.