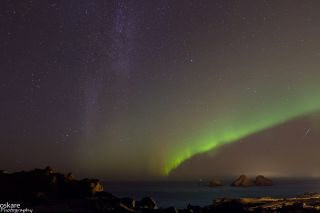 Scientists who have helped further our understanding of cosmic phenomena — from gamma-ray pulsars to galaxy formation — have been awarded top prizes from the American Astronomical Society. The following are recipients of the 2013 awards, announced by AAS this week:

Kenneth C. Freeman, an Australian National University astronomer who has studied the structure and evolution of galaxies, won the AAS's top award, the Henry Norris Russell Lectureship, for a "lifetime of seminal contributions" in the field.

"Through his many PhD students and his generous interactions with countless colleagues, his influence on galactic and extragalactic astronomy has extended far beyond his own research," AAS officials said of Freeman.

Jason Kalirai, of the Space Telescope Science Institute, was honored for his work in stellar and galactic astrophysics. Among other achievements, he devised new methods to measure the age of the Milky Way galaxy using white dwarf stars and described the fraction of mass that stars lose over their lives. Kalirai, who is 34, received the Newton Lacy Pierce Prize for outstanding achievement in observational research by an early-career astronomer.

"Being a professional astronomer is the most rewarding profession in the world," Kalirai said in a statement. "I get to use some of the most advanced tools that humans have ever created to address the universe’s biggest mysteries. It doesn’t get cooler than that!"

Eiichiro Komatsu, of the Max Planck Institute for Astrophysics, was awarded the Lancelot M. Berkeley - New York Community Trust Prize for Meritorious Work in Astronomy. Komatsu's 2011 report that placed tight new constraints on the standard cosmological model was the most highly cited astronomy paper last year, according to AAS.

For his theoretical work on how massive stars are formed, Mark Krumholz, of the University of California, Santa Cruz, was given the Helen B. Warner Prize for a significant contribution to astronomy by an early-career scientist.

The Annie Jump Cannon Award for outstanding research and promise for future research by a woman went to Sarah Dodson-Robinson, who studies the formation of planetary systems and teaches at the University of Texas, Austin.

Caltech's Keith Matthews was recognized with the Joseph Weber Award for instrumentation for his achievements in infrared astronomy at the Palomar and Keck observatories. Among other feats over his career, Matthews' NIRC2 camera in the Keck 2 telescope allowed scientists to characterize supermassive black hole at the center of our galaxy.

The Dannie Heineman Prize in Astrophysics for exceptional work by mid-career astronomers went to Rutgers University's Rachel Somerville for her scholarship on galaxy formation and evolution.

"I am thrilled and deeply honored to be awarded the Heineman prize," Somerville said in a statement. "I have come to realize that the knowledge we seek is so much more meaningful because we share the process and the insights with friends and colleagues, and this kind of endorsement from my peers is the most gratifying recognition that I can imagine."

Alice Harding of NASA's Goddard Space Flight Center and Roger W. Romani of Stanford University were honored for their work on a theoretical framework for understanding gamma-ray pulsars, which are rotating neutron stars that emit bursts of electromagnetic energy. They were given the 2013 Rossi Prize for their contributions to high-energy astrophysics.