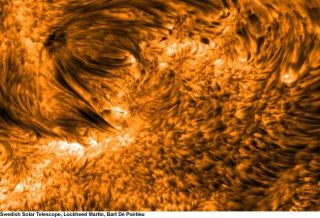 Dark features in right of image are spicules, jets of gas moving toward the camera at about 30,000 mph (13.4 kps). In upper left are small sunspots and large magnetic loops connecting the sunspots. The brighter areas are strong areas of magnetism called "plage" regions, usually organized in small flux tubes. The photo measures 40,000 miles (64,370 km) across. The spicules are about 300 miles (480 km) wide and up to 5,000 (8,050 km) miles long.

Like hair energized by static electricity, thousands upon thousands of glowing tendrils reach out from the Sun. Since these "spicules" of hot gas were discovered in 1877, scientists have been scratching their heads over what causes them.

New observations by three observatories coupled with powerful computer modeling appear to have solved the mystery.

The spikes of superheated gas, called plasma, are small compared to many of the Sun's prominent features, such as giant loops of magnetic energy that are flung many thousands of miles into the solar atmosphere. The spicules are typically 300 miles (480 km) in diameter and shoot a relatively modest 3,000 miles (4,830 km) above the Sun's surface. They scream upward at 50,000 mph (22 kps) and then vanish within five minutes, making them hard to study.

More than 100,000 spicules tickle the solar atmosphere, called the corona, at any time.

The key to their origin is in the regular cycle with which spicules regenerate. Every five minutes or so, one leaps forth from the same spot, according to the new study. It so happens that the Sun has a well-known inner ring, much like that of a bell, that works on the same cycle.

"We developed a computer model of the Sun's atmosphere to show that the periodicity of the spicules is caused by sound waves at the solar surface that have the same five-minute period," said Robertus Erdelyi von F?y-Siebenb?rgen, a professor of applied mathematics at the University of Sheffield, UK.

The ringing of the Sun involves seismic waves similar to those in an earthquake. They are usually damped down before they can leave the roiling surface and so continue bouncing around inside the Sun.

"They're basically sound waves that are trapped," said Bart De Pontieu, a solar physicist at the Lockheed Martin Solar and Astrophysics Lab. "For the most part they can't escape to the outside."

But the study found that some of the sound waves leak out, developing shock waves that propel matter upward to generate spicules and push them into the corona, De Pontieu explained in a telephone interview.

The research team now wonders if spicules might contribute to the solar wind, a constant stream of charge particles emanating from the Sun and coursing through the solar system.

Scientists don't know exactly how the mass of the solar wind gets into the corona nor what accelerates the particles into space. The spicules are a good candidate, as they carry into the atmosphere more than 100 times the mass needed to feed the solar wind, the new study concludes.

"Most of the mass of the spicules comes back down," De Pontieu said. But only a fraction would have to remain high up to account for the solar wind. However, he said, it's not clear how much if any of the mass from the spicules remains in the corona, or if it is heated to the extent that appears to be required to create the super energetic particles of the solar wind.

Previous studies had found hints of the 5-minute cycle of spicules. But scientists had only studied them on the limb of the Sun, the periphery of the hot disk as seen from our vantagepoint. The new observations allowed the researchers to examine spicules across the face of the Sun.

The investigation showed that spicules occur in groups.

Spicules are usually associated with concentrated magnetic tubes called flux tubes, giant loops that link one region of magnetic polarity to another by arcing out from the surface and back to another spot thousands of miles away. The tubes are mostly vertical, but some are inclined away from the vertical, and that's where the sound waves tend to leak out, De Pontieu said.

The findings are detailed in the July 29 issue of the journal Nature. The work was based on observations by the Swedish Solar Telescope on the Spanish island of La Palma, as well as the orbiting SOHO and TRACE observatories.