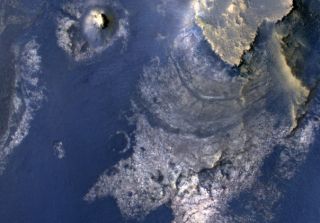 New photos of a huge crater on Mars suggest water may lurk in crevices under the planet's surface, hinting that life might have once lived there, and raising the possibility that it may live there still, researchers say.

Future research looking into the chances of life on Mars could shed light on the origins of life on Earth, scientists added.

The discovery came from a study of images by NASA's powerful Mars Reconnaissance Orbiter that revealed new evidence of a wet underground environment on the Red Planet. The images focused on the giant McLaughlin Crater, which is about 57 miles (92 kilometers) wide and so deep that underground water appears to have flowed into the crater at some point in the distant past.

Today, the crater is bone-dry but harbors clay minerals and other evidence that liquid water filled the area in the ancient past.

"Taken together, the observations in McLaughlin Crater provide the best evidence for carbonate forming within a lake environment instead of being washed into a crater from outside," study lead author Joseph Michalski, of the Planetary Science Institute in Tucson, Ariz., and London's Natural History Museum, said in a statement. [Search for Water on Mars (Photos)]

Space agencies have deployed many missions to Mars over the decades to explore how habitable its surface may have been or is today. However, the Martian surface has been extremely cold, arid and chemically hostile to life as we know it for most of the history of Mars.

Instead of scanning the surface of Mars for life, scientists have suggested the most viable habitat for ancient simple life may have been in Martian water hidden underground.

On Earth, microbes up to 3 miles (5 km) or more underground make up perhaps half of all of the planet's living matter. Most of these organisms represent some of the most primitive kinds of microbes known, hinting that life may actually have started underground, or at least survived there during a series of devastating cosmic impacts known as the Late Heavy Bombardment that Earth and the rest of the inner solar system endured about 4.1 billion to 3.8 billion years ago.

Since Mars has less gravity — a surface gravity of a little more than one-third Earth's — its crust is less dense and more porous than that of our planet, which means that more water can leak underground, researchers said. Wherever there is liquid water on Earth, there is virtually always life, and microbes underground on Mars could be sustained by energy sources and chemical reactions similar to those that support deep-dwelling organisms on Earth.

"The deep crust has always been the most habitable place on Mars, and would be a wise place to search for evidence for organic processes in the future," Michalski told SPACE.com. [Search for Life on Mars: A Timeline (Gallery)]

While researchers currently have no way to drill deep underground on the Red Planet, they can nevertheless spot hints of what subterranean Mars is like by analyzing deep rocks exhumed by erosion, asteroid impacts or materials generated by underground fluids that have welled up to the surface.

Such upwelling would first occur in deep basins like McLaughlin Crater — as the lowest points on the surface, they would be where underground water reserves would most likely get exposed.

Scientists focused on McLaughlin Crater because it is one of the deepest craters on Mars. McLaughlin is about 1.3 miles (2.2 km) deep and is located in Mars' northern hemisphere.

Michalski was actually originally trying to disprove the idea that groundwater breached the surface in many locations on Mars.

"Lo and behold, there was strong evidence for that process in this crater," he said. "Science is special because we are allowed to change our minds."

The researchers estimate that a lake existed at McLaughlin Crater for an unknown duration between 3.7 billion and 4 billion years ago. "That makes the deposits as old as or older than the oldest rocks known to exist on Earth," Michalski said.

Mounds seen on the crater floor may have come from landslides or subsequent meteor impacts. These are important because they may have rapidly buried crater floor sediments.

"That is really cool because rapid burial is the scenario that is most advantageous for preservation of organic material, if any was present at that time," Michalski said.

Since life on Earth may have begun underground, learning more about any underground life that might have lived — or may still live — on Mars could shed light on the origins of life on Earth, researchers said.

"We should give serious consideration to exploring rocks representing subsurface environments in future missions," Michalski said. "That doesn't mean drilling, but instead exploring rocks formed from upwelling groundwater, or rocks naturally exhumed from the subsurface by meteor impact."

Michalski noted that some people may ask, "'Why do I hear about the detection of water or possibility of life on Mars all the time?' The answer is because Mars is habitable in more ways than we ever realized for many years, and we are finding water in many forms and environments on Mars — many more than we predicted for a long time."

The ingredients for life the researchers describe, "including energy sources, would have been more available early in Mars' history, but it doesn't take too much imagination to picture a scenario in which the subsurface is habitable today," Michalski said. He cautioned, however, "that is much different from saying that life is there today."

The scientists detailed their findings online Jan. 20 in the journal Nature Geoscience.