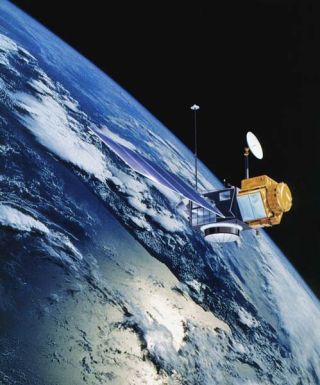 An artist's illustration of the Topex/Poseidon satellite in Earth orbit.
(Image: © NASA.)

U.S. andFrench researchers announced the end of an ocean-watching satellite Thursday,concluding a 13-year mission that transformed their understanding of Earth'slargest bodies of water.

"It'sdefinitely a happy ending," said Lee-Lueng Fu, themission's project scientist at NASA's Jet Propulsion Laboratory (JPL) inPasadena, California, in a telephone interview. "The mission launched in 1992and we specified operation from three to five years, but we got 13. That's morethan anybody could ask for."

"The oceanis changing all the time," Fu said. "This was the first time we mapped theelevation of the ocean's surface."

"It was arevolution for oceanography," Fu said of the TOPEX/Poseidon mission. "It wasthe ocean equivalent of a weather map."

But whilethe mission is over, the spacecraft won't come crashing into the Earth'satmosphere any time soon due to the relatively low drag forces in its currentorbit.

A successorto TOPEX/Poseidon - dubbed Jason- launched in December 2001 and worked alongside its predecessor, allowingflight controllers to verify its function by comparison, added Fu, who alsoserves as its project scientist at JPL.

A thirdspacecraft, the Ocean Surface Topography Mission, is expected to join Jason in2008 to continue its ocean-watching task. NASA and CNES are cooperating on bothmissions.

"This datastream, hopefully, will become a permanent asset of the internationalcommunity," Fu said.