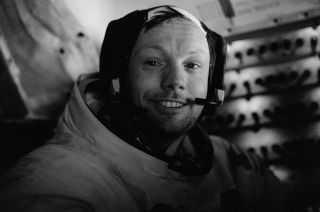 The famous first words uttered by the first person on the moon, Neil Armstrong, may not have been as spontaneous as commonly thought, according to Armstrong's brother.

Armstrong, after becoming the first human to set foot on Earth's nearest neighbor in July 1969 during NASA's historic Apollo 11 mission, said, "That's one small step for [a] man, one giant leap for mankind." (Although the "a" isn't audible in his transmission, the moonwalker insisted that the official quote included the extra word.)

In numerous interviews, and even in his own autobiography, Armstrong said he thought of the words after arriving at the moon, while waiting to exit his lunar module Eagle. But in a new BBC documentary, the astronaut's brother Dean Armstrong says the two discussed the statement months earlier, when Neil passed Dean a handwritten note during a late-night game of Risk, according to British newspaper the Telegraph.

"On that piece of paper there was 'That's one small step for man, one giant leap for mankind.' He says 'what do you think about that?' I said 'fabulous.' He said 'I thought you might like that, but I wanted you to read it,'" Dean Armstrong said, according to the Telegraph.

Neil Armstrong, who died Aug. 25 at the age of 82, had never mentioned the conversation publicly. If that scene took place just as Dean Armstrong says, it would contradict numerous statements by the first moonwalker. [Neil Armstrong Buried at Sea (NASA Photos)]

"Neil Armstrong said multiple times in multiple venues that he did not think about what to say until he got to the surface of the moon," said space history and collectibles expert Robert Pearlman, editor of SPACE.com partner site collectSPACE.com. "There were several hours after he landed, during which time he had the opportunity to give thought to what his first words would be."

That version of the story has been corroborated by other astronauts, as well, including the two other men who flew on the Apollo 11 mission with Armstrong.

"His crewmates Buzz Aldrin and Michael Collins have said he did not discuss what he would say with them either before the mission or as the mission was progressing," Pearlman told SPACE.com.

This new information from Dean Armstrong has ruffled some space enthusiasts and historians, who wonder what Neil Armstrong himself would say if he were still alive.

"Whether intentional or not, Dean Armstrong's account now suggests his brother has been lying for 40-plus years," Pearlman said.

The new BBC documentary, "Neil Armstrong — First Man on the Moon," is available to watch online here to those in the U.K.