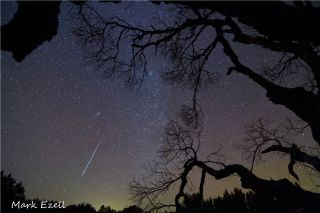 The Geminids' peak was supposed to be good this year, as it occurred in a sky left dark by the new moon. Experts had predicted that viewers in rural areas might see 100 meteors per hour early Friday morning (Dec. 14) — and perhaps even more.

Judging by the reactions of some SPACE.com readers, the Geminids did not disappoint.

"What an incredible show we had here!" Sean Parker, who watched the shower early Friday just west of Tucson, Ariz., told SPACE.com via email. "I was able to see about 50 per hour." [Photos: Geminid Meteors of 2012]

Parker constructed a gorgeous composite image of about 30 frames, which captured dozens of shooting stars streaking through the skies above a saguaro-studded desert mountain.

"This image took a lot of work, as I had to scroll through about 400 frames and find which frames had shooting stars in them, then cut out every meteor and blend," Parker said.

"The shower produced a high number of meteors and fireballs that lit up the sky," wrote Fusco, who sent SPACE.com a beautiful shot of several Geminids streaking over beachside dunes. "Hands down one of the [best] meteor showers in recent years."

Skywatchers on the other side of the world were enthralled by the Geminids as well.

"Today, I had planned to see 50 streaks and then quit with or without a pic," Hangal said. "Had almost lost hope when I could capture the 50th one, just between Betelgeuse at the bottom & Alhena in the Gemini constellation."

The Geminids— so named because they appear to emanate from the constellation Gemini (The Twins) — are one of the most dependably impressive annual meteor showers.

They result when Earth plows through debris shed by a 3-mile-wide (5 kilometers) asteroid called 3200 Phaethon. These tiny particles burn up in our planet's atmosphere, leaving bright streaks in the sky to commemorate their passing.

The Geminids' source is unusual for meteor showers, which are typically caused by streams of sloughed-off comet particles. Debris streams from the famous Halley's Comet, for example, produce the Orionids every October and the Eta Aquarids, which peak in early May.

If you missed the Geminid peak last night, don't fret; you still have a few days to catch the shower this year. The Geminids should linger until Sunday (Dec. 16) or so before fizzling out completely.

Editor's Note: If you take a photo of this year's Geminids that you'd like to share with SPACE.com for a possible story or gallery, please send it, along with your comments, to spacephotos@space.com.