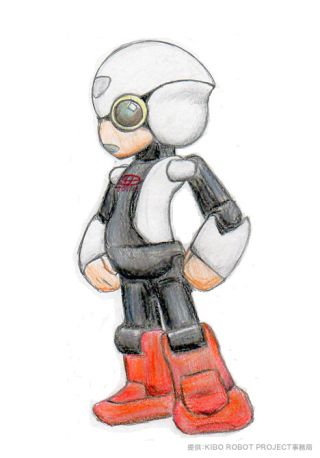 Artist's conception of the humanoid robot that will live on the International Space Station.
(Image: © Kibo Robot Project)

When Japanese astronaut Koichi Wakata arrives in space in 2013 to take command of the International Space Station, he'll have a little robotic helper ready to assist him.

A consortium of companies is constructing two doll-like robots that speak Japanese, recognize faces and perform simple experiment tasks. One will fly to the space station next year, while the other will stay on the ground as a backup.

The humanoid robot will live in the station's Japanese Kibo module. It doesn't even have a name yet, but the public is being asked for suggestions on a Japanese website.

Even at this early stage, lead designer Tomotaka Takahashi said the concept of a humanoid robot in space is capturing the participating companies' imagination. [Photos: Robonaut 2, Robot Butler for Astronauts]

"Only a few people use [iPhone voice recognition software] Siri in Japan because we are uncomfortable to talk to square gadgets. But we sometimes talk to our pets, even if they're a turtle or a fish," said Takahashi, a University of Tokyo researcher who founded the humanoid robot company Robo Garage.

"We talk to these animals because we can feel some kind of life to them that we cannot with the iPhone," Takahashi added. "So what we are doing for the Kibo robot is to encourage people to be willing to communicate with such things."

When completed in February, the robot will be about 13 inches (34 centimeters) tall and weigh 2.2 pounds (1 kilogram), making it easy to ship up to the station in the summer.

The delivery spacecraft hasn't been chosen yet, but Takahashi suspected it will be an unmanned Japanese Aerospace Exploration Agency (JAXA) Kounotori HTV. The robot will return to Earth at a yet-to-be-determined time.

The robot will do simulated, simple experiments with Wakata that could involve tasks such as mixing liquids, Takahashi said. The robot can also send information to scientists back on Earth.

If all goes well, future robot generations could work alongside astronauts and improve the humans' accuracy during routine experiments.

"We are thinking having a small humanoid, and doing some kind of experiment or a task together, [you can] get information from the robot and double-check each step," he said. "The experiment will be smoother."

Takahashi expects other uses for the technology to come out of the robot's trial run. The robot was developed after JAXA requested ideas for "solving social issues" on the space station. As the humanoid improves, it could be used as a companion for lonely astronauts.

Aims for the technology include serving as a crew member during isolating deep-space missions, or on Earth, accompanying seniors living alone.

"It has more humanity," Takahashi said, wryly adding the robot could stand in for tech support. "It's good at communicating with other machines ... we control so many things with remote controllers."

Overall, the robot's development will take more than 18 months. JAXA is providing no money for the concept, Takahashi said; the funding is coming from the consortium of companies, including Toyota, that are working together on the project.

"The members are not thinking of earning money directly by this project," said Takahashi, acknowledging there could be spinoffs of the technology on Earth. "But it's a frontier. To create some kind of symbolic robot for space, to realize the future, is a dream."