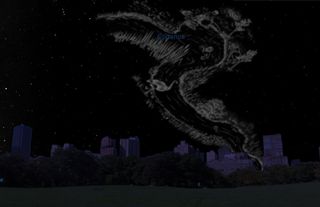 This sky map shows the location of the constellation Eridanus, the Heavenly River, in the late-night sky this week as seen from mid-northern latitudes. It is visible at about 11 p.m. local time.
(Image: © Starry Night Software)

Stargazers taking a late-night look at the clear southern sky this week may see a looping trail of stars: the faint constellation Eridanus, the Heavenly River.

If you know of a budding astronomer and are thinking of getting him or her a gift for the holidays, may I suggest a wonderful book which I’ve read and re-read countless times over the years: "Starlight Nights – The Adventures of a Star-Gazer." It is the much-loved autobiography of celebrated comet-hunter Leslie C. Peltier (1900-1980), once referred to as "the world’s greatest nonprofessional astronomer."

As a youngster, when he was just starting out learning the night sky, Peltier decided to arise before dawn on an early August morning and check out star patterns he was unfamiliar with: "complete strangers," he called them. And try as he might, he had very little success in seeing any of those stars form groupings of some legendary figure or ancient god. But one of the few things that caught his attention was a "looping trail of faint stars" in the south that he made into "a writhing snake … a slithering serpent."

It is the constellation Eridanus that Peltier was describing when he gazed up at the star-filled skies. The shapeless constellation is currently visible in the southern sky at about 11 p.m. local time. [December's Night Sky Sights (Video)]

This long body of water starts near the brilliant bluish-white star Rigel in the famed constellation Orion then flows southwestward just like a river would: a winding stream of dim stars which is fun to trace out, though whose meanderings may not be easy to trace without the aid of a star chart. So start at Orion, where the star Cursa is located to the north and west of Rigel.

After passing two stars to the west you’ll come across a close pair of stars, which have the catchy names Beid and Keid. They are derived from the Arabic words for egg and eggshell, respectively. At Zaurak the river begins a reverse curve, and then four stars extend directly to the west.

Among these stars is Epsilon Eridani, one of our closest stellar neighbors at a mere 10.5 light-years away. In fact of all the stars that are visible to the unaided eye, Epsilon is the third closest behind Alpha Centauri and Sirius.

Astronomers measure the brightness of night sky objects as magnitude, in which the lower the value, the brighter the object. While Epsilon is a star of modest brightness at best, shining at magnitude +3.7, Sirius, the brightest of all stars, blazes at magnitude -1.4, and Alpha Centauri glows at -0.3. Epsilon, you see, has only about one-third of the luminosity of our Sun and is about 90 percent as large. Thus here is a star that is reasonably comparable to our own Sun.

More than half a century ago, in 1960, Epsilon Eridani was selected by astronomer Frank Drake to be monitored by Project Ozma: an 85-foot radio telescope based at the National Radio Astronomy Observatory at Green Bank, West Virginia, was directed toward it on the infinitesimal chance that it might posses a planet with a alien civilization advanced enough to transmit radio signals. No signals were ever found in spite of the fact that we now know that this star does indeed appear to have a real planet, though as a Jupiter-like body, one probably incapable of supporting life. [10 Wildest Attempts to Contact Aliens]

In the year 2000, a team of astronomers led by Artie Hatzes, a pioneer in the search of extrassolar planets, discovered a planet circling Epsilon Eridani. Next to the recently discovered planet orbiting Alpha Centauri, Epsilon Eridani is the closest known star to have a planet. It takes 6.85 years to orbit Epsilon and has a mass about 1.6 times that of Jupiter. There is also speculation that a second, smaller planet might also be in orbit around Epsilon

Jewel at the celestial river's end

Unfortunately, stargazers in much of the United States never get to see the very end of Eridanus for it ends in a blaze of splendor. The bluish star Achernar glows at the end of the river, ninth brightest star in the sky, yet it’s so far south that only those who live near and along the Gulf Coast (Florida, New Orleans, south Texas), get a glimpse of it, poking a short distance above the horizon.

For the rest of us, Eridanus winds all the way down to below the southwest horizon. But for ancient skywatchers, the River ended not at Achernar, but with a much fainter star, Acamar.

Perhaps this heavenly river is a tribute to an actual river here on Earth, for Garrett P. Serviss (1851-1929), astronomer, popularizer of astronomy, and early science fiction writer would sometimes refer to Eridanus as the River Po, which is also happens to be the longest river in Italy. Serviss probably got this notion from Polybius, a Greek historian who lived during the first century B.C. and called the Po "Pados" (in Greek) and noted that it was to be identified with the Eridanos of the poets.