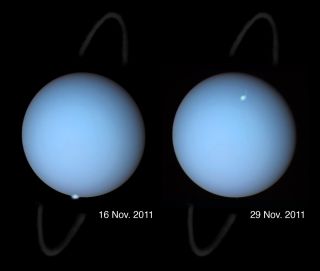 These composite images show Uranus auroras, which scientists caught glimpses of through the Hubble Space Telescope in 2011. The image was released on April 13, 2012.
(Image: © Laurent Lamy)

The seventh planet from the sun, Uranus has the coldest atmosphere of any of the planets in the solar system, even though it is not the most distant. Despite the fact that its equator faces away from the sun, the temperature distribution on Uranus is much like other planets, with a warmer equator and cooler poles.

Like Neptune, Uranus, discovered in 1781, is known as an "ice giant," in a slightly different category from Saturn and Jupiter. Both planets boast frigid atmospheres made up of ice rather than gas.

Uranus is composed predominantly of hydrogen, helium and methane. Most of the lighter gases are found in the layered atmosphere. Temperature and pressure increase farther from the insubstantial surface (like most gas giants, the surface of Uranus is set where the pressure of the gas is equal to the pressure at sea level on Earth).

The dense troposphere, which contains the planet's clouds, is frigid at minus 243 degrees Fahrenheit (minus 153 degrees Celsius) to minus 370 F (minus 218 C), making it the coldest atmosphere in the solar system. Warmed by the sun and radiation from space, the troposphere has slightly higher temperatures of minus 370 F (minus 218 C) to minus 243 F (minus 153 C). The outer layer can get was hot as 1,070 F (577 C).

Tipped on its side

Unlike most planets in the solar system, which have their equators pointed in the direction of the sun, Uranus is tipped on its side. The planet faces one pole at a time toward the sun, gradually spinning over the course of its orbit until the other pole receives light instead of darkness. The strange orientation of the planet was likely caused by a collision soon after its formation.

The collision may have done more than just tip Uranus over.

"Material from the two bodies is ejected in a debris disk, and finally satellites are formed from the debris disk," researcher Yuya Ishizawa, of Japan's Kyoto University, told Space.com. "It is possible to explain the axial tilt and the formation of the regular satellites of Uranus simultaneously."

But weather on Uranus functions much as it does on other gas giants. Like Jupiter and Saturn, the planet has bands of zones and belts that orbit parallel to the equator, which is warmer than the poles. The warm temperatures that drive the planet's weather come from the interior of the planet, rather than from the sun. The significant distance to Uranus from the sun may play a role in why the planet's interior heat overpowers the faint light from the star.

The strange orientation has an unusual affect on the planet's activity. A year on Uranus spans 84 Earth-years, so each season lasts 21 years.

"Because it's tilted over on its side, that means that, for example, the south pole wouldn't see sunlight for about 40 years," Simon said. "So, it's got really extreme seasons, which help to drive the weather."

Despite the fact that it powers the planet's weather, the internal temperature of Uranus is lower than other planets. Very little excess heat is radiated into space.

Simon said that temperature is a large part of the reason for Uranus' blandness. The ice giant doesn't have a lot of heat. In fact, it is the only planet that doesn't give off more heat than it receives from the sun, she said. That slows down the rise and fall of heat that would otherwise drive storms.

"You don't get the equivalent of thunderstorms. So, you don't see the bright clouds on Uranus that you see on the other planets," Simon said.