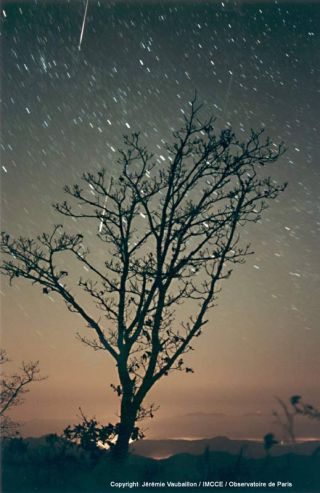 The annual Leonid meteor shower reaches its peak this week and may get a boost from a moonless weekend sky.

The actual peak of the 2012 Leonid meteor shower is on Saturday (Nov. 17) at 3 a.m. EST, but, like all meteor showers, the celestial fireworks display will be visible for a few nights before and after that peak time, weather permitting. Because the moon will have set by that time, its bright glow won't wash out any Leonids you may see.

The Leonids are associated with the periodic comet Tempel-Tuttle, first discovered in 1865. This comet has a period of 33.2 years. It was last close to the sun in 1998 and will return in 2031. After Tempel-Tuttle's discovery, it was traced back to a comet observed in 1366.

Astronomers also realized that Tempel-Tuttle's last close approach to the sun was in 1833, which coincided with one of the greatest meteor storms in history. This was when they put two and two together, and realized that meteors had their origins in comets. [Amazing Leonid Meteor Shower Photos]

But what exactly is a meteor shower? Meteors are brief flashes of light in the Earth's upper atmosphere which occur when small pieces of interstellar material, called meteoroids, enter the atmosphere and heat it to incandescence. We don't actually see the meteoroids themselves, but rather the air heated by the friction of their passage.

As the Earth travels around the sun, it is constantly encountering meteoroids, so that on any night in the year, if you observe a dark sky after midnight, you will probably see a few meteors every hour. These are known as "sporadic meteors." [Leonid Meteor Lights Up Night Sky (Video)]

Meteoroids are not uniformly distributed in space. They seem to be most commonly produced when comets venture close to the sun, melting the ice from tiny comet fragments, leaving behind small meteoroids. Under the gravitational influence of the planets, these fragments gradually spread out along the comet's orbit, forming a belt of meteoroids in space. When the Earth passes through such a belt, we see more meteors than average, and this is known as a "meteor shower."

There is a common misconception that a meteor shower is like a rain shower, with large numbers of meteors being visible. Most meteor showers only involve a few more meteors per hour than you might see any night.

On rare occasions, perhaps once a decade, observers see what are called meteor storms, when dozens of meteors can be seen every hour. The Leonid meteor shower is famous because it has caused a large number of meteor storms over the centuries.

Because the distribution of meteoroids along its parent comet Tempel-Tuttle's orbit is not uniform, it tends to produce meteor storms every 33 years, the same period as the comet. Careful observations have enabled mapping of clumps of meteoroids within the stream, leading to increasingly accurate predictions. There were spectacular Leonid storms in 1999, 2001, and 2002.

No meteor storm is predicted for 2012, but the Leonids can always be counted on to provide a good show, especially since there will be no moon to interfere with them this year.

How to see the Leonids

The best time to observe meteors is always after midnight, when the Earth is heading directly into the meteor stream.

This shower is named the Leonids because they appear to radiate from a point just inside the Sickle of the constellation Leo. It's not important to know exactly where the radiant is because the longest and brightest meteors are usually about 90 degrees away from the radiant. The radiant will be roughly half way up the eastern sky for most northern observers, so the best directions to look are south, north, and directly overhead.

It's important to dress warmly and make yourself comfortable in a reclining garden or deck chair. You will see more meteors if you keep your head still and allow at least 20 minutes for your eyes to become adapted to the dark. Be patient and spend a least an hour watching, as meteors often come in batches with long dry spells in between.

Try catching photographs of Leonids by setting your camera up on a tripod and making time exposures of at least 15 seconds, and send them along to us to share.