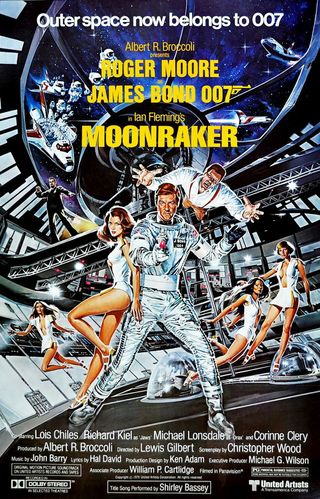 James Bond, the fictional British spy who celebrates the 50th anniversary of his film franchise this year, has done quite a lot of sleuthing in space as well as on Earth.

The latest Bond movie, "Skyfall," opens tomorrow (Nov. 9). From the first film featuring the debonair MI6 agent, to the newest, the 50-year arc of James Bond has paralleled, in many ways, the progression of the U.S. human spaceflight program.

Mercury program astronaut Alan Shepard made the first U.S. manned spaceflight on May 5, 1961, just one year before the Bond franchise began.

In fact, the stakes of the first 007 movie itself — "Dr. No," which was released in 1962 — were no less than the U.S. space program. In that film, evil genius Dr. No aims to disrupt a NASA Mercury space launch using an atomic-powered radio beam, and it's up to Bond to stop him. [Gallery: James Bond in Space]

"James Bond was the first hero of the space age," said Bond expert John Cork, author of the book "James Bond: The Legacy." "The Mercury 7 astronauts were being trained right as 'Dr. No' is coming out."

Another Bond movie, the 1967 flick "You Only Live Twice," opens with a scene where an astronaut is killed in space. That movie was filmed two weeks before three NASA astronauts died in a ground fire during a dress rehearsal for the Apollo 1 mission on Jan. 27, 1967, Cork said. "There's a real dovetailing there."

In "You Only Live Twice," the villain kidnaps U.S. and Soviet astronauts in the hopes of seeding tension to start World War III. Later, in the 1971 "Diamonds Are Forever," Bond's antagonist develops a satellite to be used as a space-based weapon, and 007 himself escapes danger at one point by stealing a moon buggy from a research laboratory.

One of the most overt, and memorable, references to space in a Bond film was in 1979's "Moonraker," which saw James Bond himself travel to space.

By the late 1970s, the space program had moved on from the moon-based Mercury, Gemini and Apollo programs and into the space shuttle era; Bond had moved on too. This time, Bond must find out why a space shuttle was hijacked during a space mission. To save the day, 007 works with brilliant and beautiful NASA scientist Dr. Holly Goodhead, and ultimately, he launches into orbit to visit a space station that sets the scene for the movie's climactic end battle.

That film was even originally planned to coincide with the first space shuttle launch, according to IMDB, but the debut of the real-life shuttle was delayed until 1981.

The James Bond film producers "were always smart enough to look at the latest advancements in technology and take advantage of them," said film critic Bill Desowitz, author of the book "James Bond Unmasked." "The hardest thing is finding greater and more interesting threats. After introducing all this globetrotting around the world, it made sense to delve into outer space."

"GoldenEye" (1995), "Tomorrow Never Dies" (1997), and "Die Another Day" (2002) each dealt with satellites or space weapons. And scenes for 2008's "Quantum of Solace" were shot at one of the world's premier telescope sites, the European Southern Observatory's Very Large Telescope in Chile.

"Three of the four Pierce Brosnan films have strong space elements," said Cork, who recently worked on the special features for the 50th Anniversary James Bond Blu-ray set. "They deal with the idea of manipulation of satellites. They're really are dealing with the way the space program works now: We're sending up incredibly sophisticated satellites."

Cork traced some of Bond's affinity with space back to the film's origin, which is the series of books by former British naval intelligence officer Ian Fleming.

"Ian Fleming was fascinated by rocketry and space," Cork told SPACE.com. "He even communicated with [sci-fi writer] Arthur C. Clarke."

Though the latest Bond entry, "Skyfall," doesn't overtly relate to space, it grapples with Bond's close relationship to technology, which is a constant theme throughout the films.

"Bond was a character who was a master of technology," Cork said. "This was something that was quite revolutionary for a film series. The notion of Bond being the first hero of the space age all goes back to technology."