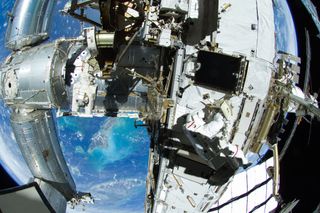 With the Andros Island and other parts of the Bahamas in the backdrop, NASA astronaut Sunita Williams and Japanese astronaut Akihiko Hoshide (out of frame) work on the exterior of the International Space Station during an Aug. 30, 2012 spacewalk.
(Image: © NASA)

Two astronauts will venture outside the International Space Station Thursday (Nov. 1) to isolate and repair an ammonia leak in part of the orbiting lab's cooling system.

NASA astronaut Sunita Williams and Japanese spaceflyer Akihiko Hoshide are slated to start the spacewalk — also known as an extra-vehicular activity, or EVA — Thursday at 8:15 a.m. EDT (1215 GMT). They're expected to stay outside for about 6 1/2 hours, NASA officials said. You can watch live coverage of the spacewalk here on NASA TV, beginning at 7:15 a.m. EDIT (1115 GMT).

Each of the orbiting lab's eight huge solar arrays has its own associated power system, and circulating ammonia helps cool this gear down. The spacewalk's first objective is to find the source of the leak, which could affect one of these power channels if it's not addressed soon.

"We don't know exactly where the leak is," space station manager Mike Suffredini of NASA told reporters during a teleconference last Friday (Oct. 26). "It's possible the leak is in the PVR itself, the [photo-voltaic] radiator itself. It could be in the pump system, or it could be in any one of the [coolant] lines." [Gallery: Building the International Space Station]

On Thursday's EVA, Williams — commander of the station's current Expedition 33 mission — and Hoshide will make their way over to the port side of the station's backbone-like truss. They'll reconfigure some lines in the affected coolant system and install a spare radiator to see if that stops the leak.

"We're real suspicious of the radiator," said spacewalk flight director Mike Lammers, of NASA's Johnson Space Center in Houston. "It kind of stretches out there and is susceptible to micrometeorite impacts."

Because the leak is so slow, it will likely take several weeks before it's known if the fix works, officials said.

If ammonia continues to escape, the station's operators will eventually have to try something else. For example, they may direct astronauts to swap out some of the coolant system's pump gear on another spacewalk. But there likely won't be an urgent need for a new fix, since the spare radiator should provide enough ammonia to keep the coolant system operating until next October or so, officials said.

NASA and its space station partners have known about the ammonia leak since 2007, and they've taken measures to deal with it before. Astronauts aboard the space shuttle Endeavour recharged the coolant system with 8 pounds (3.6 kilograms) of ammonia last year.

Spacewalks are always challenging, but Thursday's EVA is unlikely to throw anything at Williams and Hoshide that the two astronauts can't handle. In late August and early September, the duo replaced a vital power unit over the course of two spacewalks, defeating an unexpectedly stubborn stuck bolt in the process.

"I would say this is an average-skill-level EVA — maybe slightly more challenging than an average EVA," said lead spacewalk officer Allison Bolinger of the Johnson Space Center.