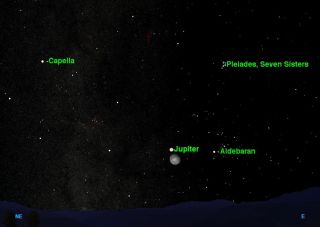 Look eastward about three hours after sunset Thursday night to see a fine astronomical treat: Jupiter rising in close proximity to the moon, surrounded by two of the closest star clusters in the sky, the Pleiades and the Hyades.
(Image: © Starry Night Software)

Look in the eastern sky for the next few nights and you will see a celestial treat.

The moon will be closest to Jupiter on Thursday night (Nov.1), but the two will also be close on Wednesday and Friday nights (Oct. 31 and Nov. 2).

The location of the moon relative to Jupiter will depend on your exact location because of something called parallax. [October 2012 Night Sky Observing Guide (Sky Maps)]

Hold a finger up at arm's length and look at a distant object. If you blink one eye and then the other, your finger will appear to jump from left to right. That's parallax, and it's what lets us view the world in three dimensions. Our two eyes are a couple of inches apart and each sees the world from a slightly different vantage. Our brains seemlessly integrate these two views into one three-dimensional picture, but if you close one eye at a time you can sense their different perspectives.

The same thing happens when people observe the moon against the starry backdrop from different spots on Earth: These slightly different perspectives create differing views.

In addition, the moon is revolving in its orbit around the Earth, causing it to appear to move from right to left against the background stars, including the planet Jupiter. Jupiter is moving too, but much more slowly than the moon, so its motion is not as obvious.

On Wednesday night, the moon will be well to the right of Jupiter, about halfway between two of the brightest and nearest star clusters, known by their ancient Greek names: the Pleiades and the Hyades.

To the unaided eye, the Pleiades looks like a tiny "dipper," except with only six stars instead of seven. It is located 410 light-years away, and contains hundreds of stars visible in binoculars or a small telescope.

The Hyades is closer to us, only 150 light-years distant, causing its stars to appear spread over a wider area of our sky.

On Thursday night, the moon will have moved to less than a degree away from Jupiter, so close that the two will fit together in the field of a telescope. For skywatchers in South Africa the moon will actually pass right in front of Jupiter, hiding it from view for over an hour in some locations, such as Cape Town.

By Friday night, the moon will be well to the left of Jupiter, not rising until around 9 p.m. local time.

Halloween is an excellent opportunity to do some "sidewalk astronomy." It's the one night in the year when there are lots of people out and about in a friendly family atmosphere.

If it's clear, set up your telescope and "share the view" with the trick-or-treaters. Impromptu Halloween star parties have become a tradition in some neighborhoods.