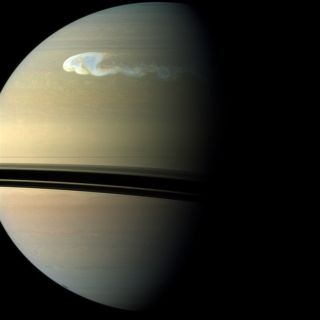 An image of Saturn taken in December 2010 by the Cassini spacecraft shows a storm with a latitudinal and longitudinal extent of 10,000 km and 17,000 km, respectively. The latitudinal extent of the storm’s head is approximately the distance from London to Cape Town. A "tail" emerging from its southern edge extends further eastward.
(Image: © Carolyn Porco and CICLOPS; NASA/JPL-Caltech/SSI)

A massive storm that encircled Saturn nearly two years ago was even more powerful than scientists had thought, new research reveals.

Observations by NASA's Cassini spacecraft — which first detected the tempest in December 2010 — show that the enormous Saturn storm sent temperatures in the planet's stratosphere soaring 150 degrees Fahrenheit (66 degrees Celsius) above normal, according to a new study.

"This temperature spike is so extreme it's almost unbelievable, especially in this part of Saturn's atmosphere, which typically is very stable," study lead author Brigette Hesman, of the University of Maryland and NASA's Goddard Space Flight Center in Greenbelt, Md., said in a statement.

"To get a temperature change of the same scale on Earth, you'd be going from the depths of winter in Fairbanks, Alaska, to the height of summer in the Mojave Desert," added Hesman, whose team describes its results in a paper to be published in the Nov. 20 issue of The Astrophysical Journal. [Video: Saturn's Monster Storm]

The team also detected a huge surge of ethylene at the time of the storm, which apparently produced 100 times more of the odorless, colorless gas than had been thought possible for Saturn. Its origin is a mystery.

"We've really never been able to see ethylene on Saturn before, so this was a complete surprise," said Goddard's Michael Flasar, team lead for Cassini's composite infrared spectrometer instrument.

The monster Saturn storm was one of the planet's so-called Great White Spots, which tend to pop up every 30 Earth years or so (or roughly once every Saturn year). This most recent one grew to encircle the planet by late January 2011, and it eventually extended about 9,000 miles (15,000 kilometers) from north to south before appearing to sputter out in late June of that year.

The tempest was the longest-lived such storm ever observed on Saturn, scientists have said. And it was the first one ever to be studied up-close by an orbiting spacecraft.

Cassini also observed two odd patches of warm air shining brightly in the stratosphere during the storm, indicating a massive release of energy into the planet's atmosphere.

In a separate study appearing in the journal Icarus, which looked at infrared data from Cassini and two Earth-based telescopes, another research team describes how these two patches merged to become the biggest and hottest stratospheric vortex ever observed in our solar system. At first, this vortex was larger than Jupiter's famous Great Red Spot.

Though visible signs of the Saturn storm are no longer evident, the Saturn vortex persists to this day. But it's unlikely to have the 300-year-plus staying power of the Great Red Spot; scientists think the vortex will likely dissipate by the end of 2013.

"These studies will give us new insight into some of the photochemical processes at work in the stratospheres of Saturn, other giants in our solar system, and beyond," said Scott Edgington, Cassini deputy project scientist at NASA's Jet Propulsion Laboratory in Pasadena, Calif.