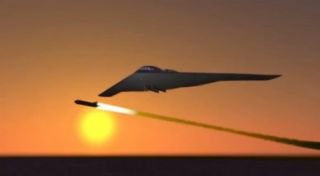 A missile used high power microwaves to knock out computers and electronics without damaging buildings during a U.S. test on Oct. 16.
(Image: © Air Force Research Laboratory)

A successful missile test has ushered in a new era of warfare in which the U.S. military can take out electronic targets without destroying a single building.

The experimental missile fired bursts of high-power microwaves at several target buildings to fry the computers and electrical systems inside during a test at the Utah Test and Training Range on Oct. 16. Such results signaled success for the Counter-electronics High-powered Advanced Missile Project (CHAMP) created by Boeing Phantom Works and the U.S. Air Force Research Laboratory.

"In the near future, this technology may be used to render an enemy's electronic and data systems useless even before the first troops or aircraft arrive," said Keith Coleman, CHAMP program manager for Boeing Phantom Works.

The idea of using microwaves or electromagnetic pulses (EMPs) to knock out electronic systems without having to reduce cities or military bases to rubble first arose during Cold War nuclear tests. Nuclear explosions created EMPs that unexpectedly damaged some civilian power grids and facilities.

That spawned the military dream of a nonlethal takedown weapon that could disable an enemy's radar, communications and targeting computers — effectively leaving them blind and unable to respond effectively to follow-up attacks by regular military forces. Such weapons could prove especially useful when assaulting enemies hidden in heavily populated cities or towns without causing civilian casualties.

But the secrecy surrounding U.S. military weapons research led some critics to argue that microwave weapons represented an impossible dream as recently as last month.

Such critics were apparently wrong. The CHAMP missile's microwaves proved so effective during the recent test that they knocked out some of the cameras used to record video footage of rows of computers blinking off. CHAMP went on to hit seven targets during the one-hour test.

CHAMP's three-year, $38 million program could eventually deploy up to five prototype missiles. The latest testing seems to suggest that Boeing and the Air Force have succeeded in creating a functional missile capable of taking out many targets with multiple shots.