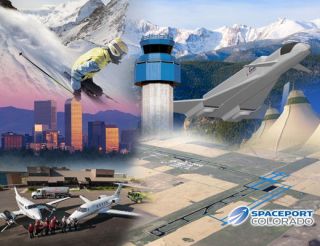 The proposed Spaceport Colorado is moving closer to reality, with its supporters seeing it as an ideal hub to support high-speed suborbital flights with intercontinental range.

Founded in late 2010, Rocket Crafters Inc. of Titusville, Fla., is focused on development, manufacturing and distribution of rocket propulsion and dual-propulsion (jet/rocket) suborbital flight vehicle products to the commercial markets in the space, space exploration and defense industries.

Front Range Airport has 996 acres of developable land adjacent to existing ramps or is master planned to be accessible to ramps and taxiways. A 6,300-acre business park is also planned for development to support airport-related commercial activities and businesses with direct access to highway, rail, and airport services.

Upon receipt of a spaceport license from the Federal Aviation Administration, Rocket Crafters intends to locate certain pilot astronaut and mission specialist training activities at the spaceport.

Rocket Crafters plans to establish offices and specialized facilities at Spaceport Colorado to support up to 80 full-time jobs.

According to its website, Rocket Crafters’ vision is to link the world’s major commerce centers into a global network of commercial spaceport facilities from which air-space carriers operate high-speed suborbital flights with intercontinental range. [Photos: Take a Tour of Spaceport America]

“We are establishing the first commercial spaceflight academy using rocket- powered and suborbital-capable flight training vehicles. We anticipate our 1st class for FAA approved commercial astronaut wings for Pilot and Mission Specialist will begin in 2014", the website reads.

Rocket Crafters plans to introduce a primary-level trainer capable of teaching conventional-to-rocket-powered flight transition before the end of this year and begin delivery of new jet/rocket powered aircraft to flight schools and aviation colleges beginning in 2013.

“Much of the design/engineering for our advanced sub-orbit capable space plane has been completed,” the group’s website explains. “We anticipate first flight sometime before the end of 2014."

“They will complement America's highly developed air transportation system by being located on or near major commerce and transportation hubs like Denver,” Jones said.

“We applaud the leaders from Front Range Airport, Adams County, and the State of Colorado in taking this bold step and leading the nation in what some call 'the second Golden Age of Flight,'" Jones said.

The FAA’s Office of Commercial Space Transportation is responsible for licensing, regulating and promoting the commercial space transportation industry.

Within those three matching grants, $200,000 was awarded to Colorado’s Front Range Airport Authority. That grant will be used to conduct environmental and other feasibility analyses for a potential FAA Commercial Launch Site Operator’s License.

The feasibility study is a first step in a process to establish a spaceport in Colorado.

“Having a spaceport in Denver will make Colorado a leader in space travel and solidify our reputation as a pioneer in the 21st century innovation economy,” Bennet said. “It will bring jobs to our state and fuel economic development and scientific research. This effort has been an ‘all-hands-on-deck’ approach and I’m proud to partner with leaders throughout the state to work on making this dream a reality.”

Udall said that Colorado “is an ideal hub for a spaceport” as the state is home to the nation’s second‐largest aerospace industry, a well‐educated work force, and a large technology business sector.

“This competitive grant will support Colorado’s advances in the way we travel in space, and will help grow economic opportunities and well‐paying jobs for Coloradans,” he said.