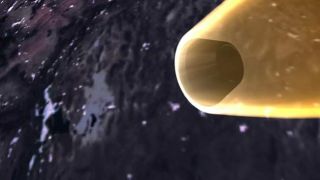 When the Stardust sample return capsule nose dives back to Earth in January, it will become the fastest human-made object to streak through the atmosphere. Scientists and engineers are at the ready to observe the spectacular sky show-and savvy skywatchers can join in on the aerial action too.

If all goes to plan, Stardust will release its sample return capsule carrying comet and interstellar dust particles on Jan. 15 at 12:57 a.m. Eastern Standard Time (EST). Four hours later, the capsule will enter Earth's atmosphere, zooming toward Utah and a parachute landing at roughly 5:12 a.m. EST.

During its plummet into Utah, the heat-thwarting capsule will skyrocket across the Western United States [map].

According to Stardust officials, the fireball should be visible from San Francisco perhaps up to and beyond Portland, shooting over Nevada toward its Utah landing. The artificial meteor is expected to peak in brightness as it penetrates deeper in the Earth's atmosphere, lighting up to roughly the brilliance of Venus for about 90 seconds. That brightness is expected to peak over Carlin, Nevada.

So if you live in Northern California, Oregon, Washington, Northern Nevada, Southern Idaho or Western Utah you should be able to see some part of Stardust sky show. The closer you live to the trajectory, which runs from Crescent City, California and then through Winnemucca and Elko Nevada, and finally to Western Utah, the higher the fireworks in the early morning sky will be.

The velocity of Stardust's sample return capsule as it slices through the Earth's atmosphere is a hasty 28,860 mph (12.9 kilometers per second). At that speed, the capsule surpasses the record set in May 1969 during the return of the Apollo 10 command module, the highest speed ever attained by human beings: 24,861 mph (11.11 kilometers per second).

Even at that rate, it still doesn't beat the heat seen by the Galileo probe as it plunged into Jupiter's atmosphere on Dec. 7, 1995. The small craft reached a blistering 106,000 mph (47.4 kilometers per second).

But nobody was on the scene to get an eyeful.

Stardust's sample return capsule is a lightweight. It tips the scale at 101-pounds (46 kilograms).

In 2004, Genesis-a sister mission of Stardust-made a similar return, jettisoning a sample return capsule four-times the mass of Stardust.

Due to improperly placed sensors on the Genesis capsule, however, its parachute system failed to deploy. That resulted in a precisely placed, but busted-up capsule when the vessel hit the desert landscape at high speed. Despite the hard-landing, researchers remain hopeful they can extract meaningful science from the returned specimens of solar wind.

Four hours after release from the main Stardust spacecraft, the sample return capsule will enter Earth's atmosphere at 410,000 feet (125 kilometers) over the Pacific Ocean.

At this point, the capsule is about 551 miles (886 kilometers) from its landing zone in Utah, and on its way to claim the record of the fastest human-made object ever to enter Earth's atmosphere.

By entry plus 38 seconds, the capsule will have already covered half the horizontal distance to its landing zone. At this point, friction from the entry is to raise the capsule's heat shield temperature, making it observable via infrared tracking equipment.

At entry plus 52 seconds, at an altitude of 200,000 feet (61 kilometers), the capsule will experience peak heating: the heat shield's exterior will spike at 365 degrees Fahrenheit (185 Celsius). Ten seconds later, peak deceleration will occur as the rapidly slowing capsule experiences 38'gs-or 38 times the force of gravity.

After nearly seven years of cruising through space, and surviving its high-speed fall, the Stardust capsule will be on a heading that leads to the U.S. Air Force Utah Test and Training Range (UTTR), southwest of Salt Lake City. Spacecraft navigators are looking to plop the capsule into an ellipse 47 by 27 miles (76 by 44 kilometers) within the UTTR.

Scientists are anxious to scrutinize the fiery fall of the capsule. Data collected is expected to help understand how natural material incoming from space is altered as it enters Earth's atmosphere. This information would be helpful in piecing together a story on chemical changes in compounds during that process-a puzzle piece for astrobiologists that study the origin of life.

A crew of researchers flying on a heavily-instrumented NASA DC-8 aircraft will study the small, speeding Stardust capsule returning from space. They face a daunting task of tracking and observing the capsule as it hurtles through the atmosphere and slows before parachuting into a Utah desert landing zone.

The airborne campaign is coming together, with the DC-8 arriving on Jan. 3 at NASA's Ames Research Center in Silicon Valley. Once there, it will be loaded with science gear. A Jan. 11 first test flight is also on the books.

"We have now turned our attention on setting up ground-based observations as well, including involving the public in documenting the reentry," said Peter Jenniskens, principal investigator of the Stardust Sample Return Capsule Re-entry Observing Campaign. He is a meteor astronomer at the SETI Institute in Mountain View, California.

"Some observations can only be done from the ground, such as listen for the sonic boom and observing the hot air trail in the wake of the sample return capsule drift in front of the Moon," Jenniskens told SPACE.com.

"Also, we'd like to involve the public in taking images and video of the reentry because the view from each location will be a little different, depending on how the capsule itself shields the light coming from the front," Jenniskens said.

The capsule will approach the landing zone from a westerly direction. The best opportunities for viewing the entry will be along Highway 80 between Carlin, Nevada and Elko, Nevada, and further east to the Utah border, where the capsule's front side can be observed before it passes over the observer on the ground.

The peak brightness will decrease further from Carlin, lessening to about the brightness of Venus when seen from Boise, Idaho, and Salt Lake City. Observers using the naked eye will likely see the capsule as a very bright pinpoint of pink-white light.

For certain viewing locations just north of the trajectory line, the capsule will appear to pass by the Moon-above it, or below it, depending on the viewer's location.

By choosing their positions carefully, some observers will be able to see the capsule pass in front of the Moon. As seen by the naked eye, the capsule will disappear in the glare of moonlight, but by looking through telescopes, observers may see a tiny dot, perhaps trailed by a dark wake of dissipating heat shield material and hot air.

Moving at many times the speed of sound, the capsule will take only two to three video frames to appear to pass by the Moon.

The trail may form a thin line behind the capsule, especially near the point of peak brightness where atmospheric friction and dissipation of heat is most intense.

If you would like to become part of the observation campaign, Jenniskens noted, you can help study the reentry by contributing photos or video to NASA.

If you'd like to take part in watching the Stardust capsule's history-making dive into the record books, check out NASA's viewing forum.