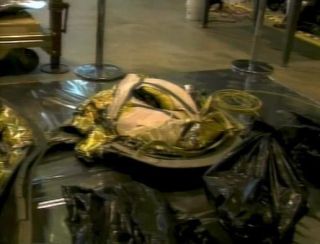 The science canister from the Genesis mission was moved into the cleanroom at the U.S. Army Dugway Proving Ground in Utah Wednesday evening. A team of specialists plucked pieces of dirt and mud that had lodged in the canister after the mission.

Video of the Crash

TOOELE, UTAH -- It's not the kind of "breaking news" that NASA wanted.

Yesterday's crash of the Genesis sample return canister forced scientists to look for slivers of hope in the busted up remains of fragile collection arrays. The good news is that they believe they see large pieces of the thin arrays inside the breached specimen canister.

Those large pieces of the thin arrays - ultra-pure wafers of gold, sapphire, silicon and diamond - are embedded with the solar wind particles.

The Genesis sample return capsule carrying those solar specimens entered Earth's atmosphere yesterday and dropped into a preplanned entry ellipse at the Utah Test and Training Range as predicted. However, a malfunction of still unknown cause resulted in the capsule's parachute system not being activated.

Spinning out of control, the capsule impacted the ground at a 193 miles per hour (311 kilometers per hour). The crash occurred near Granite Peak on a remote portion of the range. No people or structures were anywhere near the area.

The science canister from the Genesis return capsule was moved some 30 miles from the crash site into a dedicated cleanroom at the U.S. Army Dugway Proving Ground in Utah early Wednesday evening. Once there, a team of specialists began plucking pieces of dirt and mud that had lodged in the damaged canister.

The Genesis team is ready to begin a kind of cosmological autopsy, carefully inspecting the contents of the canister.

"There's a lot that we still don't know about the contents of the sample return canister itself," said David Lindstrom, Genesis Program Scientist at NASA Headquarters in Washington, D.C. "Today we hope to get into the sample return canister and get some sort of inventory of the contents and some projection of the science," Lindstrom told reporters today in a telephone update from Dugway Proving Ground.

"There was a lot of damage done," Lindstrom said. "We have a mangled mess of the spacecraft."

Some of the contents of the canister actually spilled out into the impact area, he said, with people now back at the crash site to look for additional pieces buried in the dirt.

Lindstrom told SPACE.com that, indeed, the sample canister had been ripped open.

"There's about a six-inch gap between the top and the bottom," he said. "The spacecraft was tumbling as it came in...and actually landed on one edge. So we have one major part of this flat cylindrical sample container that is severely crushed. The other part appears to have little damage, although it has been opened."

Over the next few days, ground handlers should have a better idea of when the science canister and its cargo can be sent to the NASA Johnson Space Center in Houston, Texas. Once there, specialists are to begin a painstaking search for what science can be gleaned from the shards of collector plates.

The scientific community is optimistic, Lindstrom added, because the solar wind particles - ions - are embedded within the collectors. "So we're very hopeful of getting good science out of this."

Although the science canister has not as yet been opened for complete examination, a visual inspection of the hardware has buoyed the hopes of scientists.

"We haven't actually been inside there to measure, but we believe we can see full 10-centimeter hexagons," Lindstrom told reporters.

Some of the other plates look to have been reduced to dust and are not scientifically usable, he said, but there are sizable pieces. Overall, there were five large frames that held some 55 hexagons each, Lindstrom said. So there are hundreds of these hexagons. Each of the frames is the size of extended arms making a circle. "So there was a lot of area in these plates," he said.

"We don't really know enough now to say more," Lindstrom said. "I think we'll have a pretty good idea in the next couple of days."

Meanwhile, NASA Administrator, Sean O'Keefe, also felt the sudden impact of Genesis, noting in a post-crash statement that "exploration is difficult but essential."

"We're encouraged by the news out of Utah, despite the hard impact landing of the Genesis sample return capsule," O'Keefe said. "The spacecraft was designed in a way to give us the best chance at salvaging the valuable science payload should we suffer a landing like the one we witnessed today.

"Our re-entry plan was based on safety, and the choice of Dugway was intentional. While today's developments may be disappointing to some, I know the entire NASA family is thankful no one was injured," the NASA chief stated.

O'Keefe said that NASA remains hopeful that what appears to be a setback will eventually return some impressive results.

"After all, this isn't an Olympic event where we're awarded a medal for a perfect landing," O'Keefe said. "Our final achievement will be measured by what we've learned over the entire three-year mission."