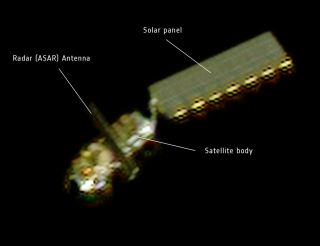 On 15 April, the French space agency CNES rotated the Pleiades Earth observation satellite to capture this image of Envisat. At a distance of about 100 km, Envisat’s main body, solar panel and radar antenna were visible.
(Image: © CNES)

NAPLES, Italy — The European Space Agency (ESA) faces the uncomfortable choice of either actively removing its dead Envisat satellite from low Earth orbit or risk being held liable if Envisat damages another satellite, a member of the International Institute of Space Law (IISL) said.

Because it elected to continue operating Envisat until it had too little fuel to be powered to a lower orbit, as international guidelines prescribe, ESA could be held liable for negligence, or even gross negligence, if Envisat or pieces of it damage an active satellite in the 100-plus years Envisat will remain in orbit, according to the IISL analysis.

In a presentation in Naples, Italy, to the 63rd International Astronautical Congress, Martha Mejia-Kaiser, an IISL member from the Autonomous National University of Mexico, said Envisat is a “ticking bomb” that poses an unusually large danger to a heavily populated corridor in polar orbit at 780 kilometers in altitude.

Launched in 2002, Envisat has a 26-meter cross section, weighs some 8,000 kilograms and, importantly, was not passivated before it suddenly went silent in April. [Photos: Envisat Satellite & Earth Views]

Propellant remnants, still-charged batteries, residual gases and other stored energy only add to the danger posed by the satellite.

Mejia-Kaiser said it would have taken just 60 kilograms of fuel to lower Envisat’s orbit by 30 kilometers, to 750 kilometers. From this orbit, natural forces likely would have forced the satellite into the atmosphere within 25 years — as international guidelines urge operators of low-orbiting satellites to do.

Instead, ESA continued operating Envisat as an active and highly valued environmental-monitoring satellite until its unexpected shutdown.

“Why did ESA prioritize the operating of Envisat until the last drop of fuel rather than the stability of this precious area in outer space, and the welfare of this valuable orbit?” Mejia-Kaiser said in her presentation. She added that while Envisat was launched before orbital-disposal guidelines were published, the decision to continue operating it was made well after ESA signed a code of conduct that adopts these guidelines.

“ESA’s choice of futures is reduced to the expensive options: to actively remove Envisat or to become liable and pay compensation in case of future collisions,” she said.

ESA and other space agencies are studying future debris-removal technologies that today are viewed as overly risky and expensive. Space law experts disagree over whether the agency could be sued for negligence, an action that would be without precedent.