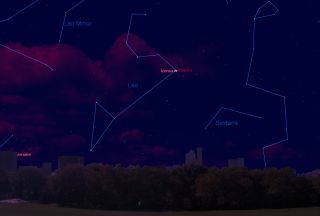 This sky map shows the location of brilliant planet Venus and the bright star Regulus in the pre-dawn sky on Oct. 3, 2012, as viewed from mid-northern latitudes.
(Image: © Starry Night Software)

Early-bird skywatchers on Wednesday (Oct. 3) will be treated to a rather extraordinary sight, when the most brilliant planet passes exceptionally close to one of the brightest stars in the sky.

The planet is Venus and the star is Regulus in the constellation of Leo, the Lion. The celestial pair promises to dazzle observers before dawn on Wednesday, weather permitting.

Venus is by far and away the brightest morning "star" and is currently the focal point of the eastern dawn sky. It will, in fact, remain this way all through the balance of the autumn season. Venus rises a bit more than three hours before sunrise — that’s even before the first light of dawn.

In the days and weeks to come, early risers can take note of the fact that Venus will slowly be appearing lower, and a bit less brilliant, in the night sky. Even now, the planet appears ever so slightly lower and less dazzling than it did September, but this astonishingly bright planet is still positioned almost as well as it can be for a predawn apparition. [October's Night Sky Sights (Sky Maps)]

At present, Venus glows just to the west (right) of the famous backwards question-mark pattern of stars known as the "Sickle of Leo" and is poised above and to the right of Leo's "lucida" – its brightest star – the bluish first magnitude star, Regulus. But because Venus is moving at just over a degree per day to the east, the space between them will rapidly close in the coming mornings. (Your closed fist held at arm's length covers about 10 degrees of the sky.)

On Wednesday morning, as viewed from the U.S. East Coast, Venus will slide as little as 7.5 minutes of arc to the south of Regulus. To give you some idea of how small this is, it is only one-fourth the apparent width of a full moon or one-eighth of a degree.

By the time Venus and Regulus have risen for the West Coast, the gap separating the two will have widened to 12 minutes of arc. That’s equal to the separation between Mizar and Alcor, the double star that marks the bend in the handle of the Big Dipper. Astronomy guides often state that if you can spy Alcor next to the brighter Mizar without optical aid, that you have normal vision.

But seeing Regulus so close to Venus on Wednesday morning may be more of a challenge because of Venus' overpowering brilliance. Binoculars will no doubt prove to be a great assistance in viewing this, as Venus is now shining at magnitude -4.1, compared to bluish Regulus at magnitude +1.3 (the lower the number, the brighter the object). Converting this 5.4-magnitude difference into a ratio, we find that Regulus — one of the 21 brightest stars in the sky — shines only 1/158th as bright as Venus!

Editor's note: If you snap an amazing photo of Venus and Regulus, and you'd like to share for a possible story or image gallery, send image and details (including location info) to managing editor Tariq Malik at tmalik@space.com.