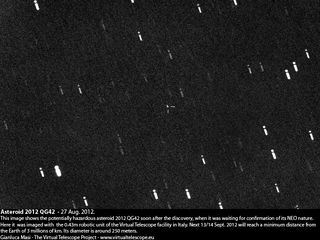 A newfound  asteroid that may be the size of three football fields will whiz by Earth on Thursday (Sept. 13), and you can watch the close encounter live online.

Asteroid 2012 QG42 is between 625 feet to 1,400 feet wide (190 to 430 meters) and was first spotted by scientists last month. Researchers say the space rock has no chance of hitting Earth this week when it makes its closest approach on Thursday.

The asteroid will pass by at a safe distance of about 7.5 times the Earth-moon distance. The moon is, on average, about 238,000 miles from Earth.

Asteroid 2012 QG42 is, however, listed as a "potentially hazardous asteroid" by the Minor Planet Center at Cambridge, Mass., meaning it may pose a threat in the future.

At least two online observatories are tracking the asteroid's pass by Earth.

The Virtual Telescope Project has been tracking asteroid 2012 QG42 since last week and posting images online.

On Thursday, the Slooh Space Camera night sky observing website will provide a live view of asteroid 2012 QG42's closest approach in a webcast starting at 7 p.m. EDT (2300 GMT), offering views from at least one of its telescopes at its observatory in the Canary Islands, off the west coast of Africa. You can tune into the Slooh webcast by visiting the group's website here: http://www.slooh.com

"Near Earth Objects have been whizzing past us lately, undetected until they have been practically on top of us. This illustrates the need for continued and improved monitoring for our own future safety," Bob Berman, a Slooh editor and Astronomy Magazine columnist, said in a statement. "It is not a question of if, but whensuch an object will hit us, and how large and fast it may be going."

Berman added that to observe near-Earth asteroids like the one passing by on Thursday "provides instruction and perhaps motivation to keep up our guard, as well as a sense of relief as it speeds safely past at a mere one fifteenth the distance to the nearest planets."